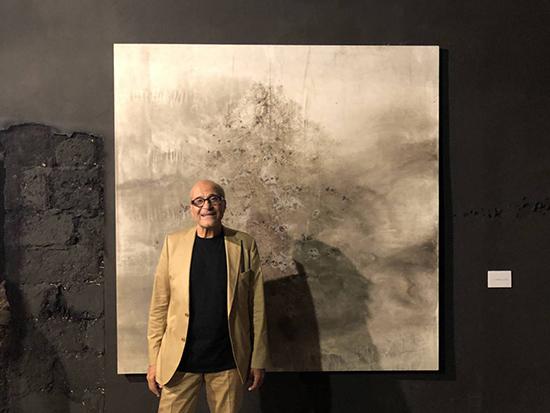 The exhibition takes place in what used to be the headquarters of L’Orient Le Jour in Beirut Souks, a war-torn building that represents the history of Lebanon to this artist.

BEIRUT: On Tuesday night, Lebanese-Armenian artist Jean Boghossian opened the doors to his new exhibition, “Building with Fire,” where he welcomed visitors from all around the world to witness his art, which portrays fire as a means of both destruction and construction. “The labyrinth is my life,” wrote Boghossian on one of the walls.

In his third major exhibition in Beirut, organized with Italian curator Bruno Corà and the Lebanese Cultural Festivals Associations in collaboration with Tanit Gallery, the artist presents some of his previous works with fire presented in the 57th Venice Biennale recently alongside new avant-garde art pieces.

With “Building with Fire,” Boghossian entertains the idea of playing with fire, mastering this element after eight years of experimenting. He uses paper and empty canvases mainly, while smoke and a blowtorch are his paint brushes. “I jumped into improvisation and abstraction 15 years ago, I’ve been in abstraction ever since, but even then I was questioning and researching various techniques until I started with fire 8 years ago,” Boghossian told Annahar.

He then explained the name of the exhibition, “Building with Fire,” which refers to a building that was destroyed during the war. Through his art, however, he builds with fire rather than destroy, which highlights the double-edged nature of fire.

The exhibition takes place in what used to be the headquarters of L’Orient Le Jour in Beirut Souks, a war-torn building that represents the history of Lebanon to this artist. “Actually the building was very difficult to get to, I was very lucky to know the owner and to propose this to him and he found it an extraordinary idea. Of course, we had to take approvals from the city and Solidere,” Boghossian said.

The location of the exhibition was particularly praised by the attendees, “many art exhibitions are done in places that are usually put with a neat, and clear background, the old L’Orient Le Jour building adds a certain touch to the message Jean is trying to convey, by showing that art can be admired even in the middle of a war zone.” Nasser Soumi told Annahar.

The fourth floor of the exhibition features a wooden bridge, which is a way for Boghossian to showcase the need for humans to communicate and bridge their cultures instead of creating wars.

For the younger generation, the exhibition stood as a new way to see the Civil War “I never saw anything like that before, it’s a new perspective on what the Civil War was,” Kaline Dijian told Annahar.

– Tala Ramadan and Marina Moufti contributed to this article.