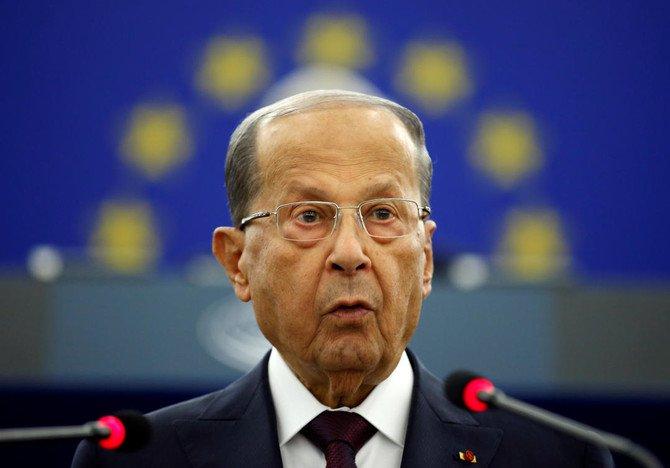 BEIRUT: Lebanon’s currency is not in danger and rumors about the economy are causing harm, President Michel Aoun said on Wednesday, amid concern that a political deadlock has blocked urgent reforms and left the heavily indebted country vulnerable.
Lebanon has been without a government for four months since a national election. The central bank has issued repeated assurances about the soundness of the Lebanese pound’s peg to the dollar and the size of its foreign currency reserves, in response to speculation over the currency’s future.
“The Lebanese pound is not in danger and Lebanon is not on the road to bankruptcy. The economic situation is difficult but the things being spread as rumors are harming Lebanon,” Aoun said, in comments published by his office.
“We do not deny that there is a crisis,” Aoun said, but added that the country was working to address it.
Lebanon had the world’s third highest debt-to-GDP ratio, at over 150 percent, at the end of 2017. The International Monetary Fund wants to see immediate and substantial fiscal adjustment to improve debt sustainability.
The failure of politicians to form a government needed to undertake the necessary reforms following the parliamentary election in May has added to concern for the economy.
Leaders from across the political spectrum have in recent months said the political stalemate is harming the economy and a government needs to be formed. Parliament Speaker Nabih Berri this month said the country was in “intensive care” and the economic situation was “very dangerous.”
While politicians have stopped short of saying the peg is in danger, some economic analysts abroad have been considering the possibility of a devaluation.
“Lebanon’s ongoing political stalemate has renewed market concerns over the country’s frail balance sheets which could propel the government to devalue the Lebanese Pound … Under this scenario, the authorities would find it increasingly challenging to service their large foreign currency debts,” Japan’s MUFG Bank said in a report on Wednesday.