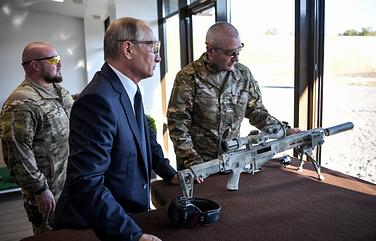 THEME PARK PATRIOT /Moscow Region/, September 20. /TASS/. Russian President Vladimir Putin has set the task of starting the development of new weapons that may become operational in many years’ time.

“The key issue on our agenda is to form another long-term state program for armaments. The current program extending till 2027 was launched earlier this year. It incorporates the modern world trends in the development of military hardware and weapons as well as the experience of using Russian weaponry in combat in Syria,” Putin said at a meeting of the Military-Industrial Commission on Wednesday. “As a result the armed forces are to get the newest weapon systems surpassing the parameters of their foreign counterparts. Putin mentioned the missile system Sarmat, fifth generation fighter jet Sukhoi-57, highly-protected main battle tank on the platform Armata, air defense system S-500 and submarine of project 677.

“Meanwhile, it is necessary to move forward and to start planning the development and production of new generation weapon systems that will determine the image of the Russian Armed Forces in the long term, for the forthcoming decade.