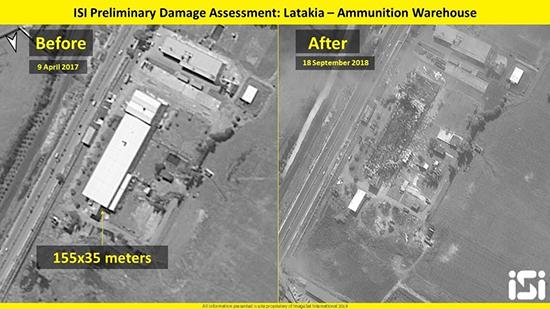 Timely released satellite images have revealed the destruction left by IDF air strikes in Syria’s Latakia after Israel was forced to make a rare admission to the raid which resulted in the downing of the Russian Il-20 recon plane.

On Wednesday, Israeli satellite imaging company ImageSat released three photos of an “ammunition warehouse” in Latakia, showing it before and after the Monday night attack. The three photos, posted on Twitter, show the building was completely destroyed in the strike.

Israel does not normally acknowledge its airstrikes in Syria, at least not until much later. However, the IDF made a rare immediate admission of responsibility on Tuesday, after the Russian Defense Ministry identified Israeli F-16 jets as taking part in the attack, and said the Il-20 aerial observation platform vanished from radars during the strike.

Moscow criticized Israel for not providing advance warning of the raid and said the Israeli jets used the Russian plane to mask their approach. Targeting the Israelis, Syrian air defenses fired the missile that shot down the Il-20 instead.

The IDF rushed to explain that their airstrikes targeted a Syrian army facility “from which weapons-manufacturing systems were supposed to be transferred to Iran and Hezbollah.” On Tuesday, the IDF expressed“sorrow” for the deaths of Russian airmen, but once again said the responsibility lies with the “Assad regime.”

Major-General Amikam Norkin will arrive in Moscow on Thursday, and will present the situation report on the incident, including “the findings of the IDF inquiry regarding the event,” and the “pre-mission information” the Israeli military was so reluctant to share in advance.

Norkin will be joined by Brigadier General Erez Maisel of the International Cooperation Unit, as well as officers of the Intelligence and Operations directorates of the Israeli air force, according to the IDF. The delegation is also supposed to further acquit themselves of any blame and inform Moscow of “continuous Iranian attempts to transfer strategic weapons to the Hezbollah terror organization and to establish an Iranian military presence in Syria.”

Though the Russian military condemned“these provocative actions by Israel as hostile” and said it reserves “the right to an adequate response,” President Putin described the loss of the plane as a likely “chain of tragic accidental circumstances,”rather than a deliberate provocation.

Monday’s attack came just hours after Russia and Turkey negotiated a partial demilitarization of the Idlib province, which is the last remaining stronghold of anti-government militants, including the Al-Qaeda affiliate Hayat Tahrir al-Sham (also known as the Jabhat Al-Nusra).

At the request of Damascus, Russia sent an expeditionary force to Syria in September 2015, to help the government defeat Islamic State (IS, formerly ISIS) and other terrorist groups.