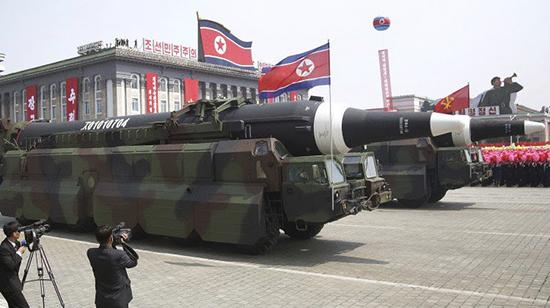 North Korea has committed to dismantling its nuclear weapons programme by the time US President Donald Trump’s term ends in January 2021, US Secretary of State Mike Pompeo said on Wednesday.

Building on what Trump called “tremendous progress”, Pompeo said he has invited his North Korean counterpart, Ri Yong-ho, to meet next week in New York, “where we are both already scheduled to be in attendance at the United Nations General Assembly meeting”.

Pompeo is also scheduled to lead a UN ministerial meeting on North Korea on September 27.

He said in a congratulatory statement on the “successful outcome” of a third inter-Korean summit concluded in Pyongyang overnight that “the United State is prepared to engage immediately in negotiations to transform US-DPRK relations”.

“We have invited North Korean representatives to meet our special representative for North Korea, Stephen Biegun, in Vienna, Austria, at the earliest opportunity,” Pompeo said in a written statement.

“This will mark the beginning of negotiations to transform U.S.-DPRK relations through the process of rapid denuclearization of North Korea, to be completed by January 2021, as committed by Chairman Kim,” Pompeo continued, “and to construct a lasting and stable peace regime on the Korean Peninsula”.

Before leaving Washington for flood-stricken North Carolina on Wednesday morning, Trump told reporters: “We had very good news from North Korea, South Korea. They met, and we had some great responses.”

Trump also confirmed that he received “a tremendous letter” from North Korean leader Kim Jong-un, delivered “three days ago”. In it, Kim requested a second meeting with Trump, which the US is trying to coordinate, White House spokeswoman Sarah Huckabee Sanders said.

“We’re making tremendous progress with respect to North Korea,” Trump said, adding that the relationship has been “very much calmed down”.

“Prior to my coming into office, a lot of people thought we were going – it was inevitable – we were going to war in North Korea,” he said.

It was widely reported last year that the Trump administration was considering a pre-emptive strike against North Korea.

Of the just-concluded summit meeting between Kim and South Korean President Moon Jae-in, Pompeo said the US welcomed the leaders’ “reaffirmation of the Singapore joint statement of complete denuclearization of the Korean peninsula, including the permanent dismantlement of all facilities at Yongbyon in the presence of US and [international] inspectors”.

He also welcomed Kim’s decision to complete the previously announced dismantlement of the Tongchang-ri site in the presence of US and International Atomic Energy Agency inspectors, agreed to by Kim and Trump at their meeting in June in Singapore, “as a step toward the final fully verified denuclearization of North Korea”.

Stephan Haggard, a professor of Korea-Pacific studies at the University of California, San Diego, said Pompeo’s statement showed that “the US did want to get back to the negotiations” after Trump called off Pompeo’s planned trip to Pyongyang last month.

“What we don’t know is what, if anything, the US is willing to concede to get forward momentum,” Haggard said. “The US has a pretty good idea of the nature of the steps it seeks, but it has been less clear what it is willing to offer in return.”

He added, “Defining the negotiations as aimed at ‘transforming US-DPRK relations’ suggests a much wider negotiating agenda.”