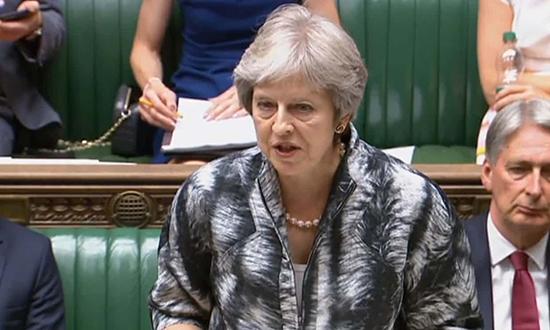 Dan Sabbagh and Daniel Boffey in Salzburg, and Pippa Crerar

Theresa May was left fighting to save her Chequers Brexit plan and with it her authority as prime minister after she was ambushed at the end of the Salzburg summit when EU leaders unexpectedly declared that her proposals would not work.

On Thursday night the transport secretary, Chris Grayling, hit back for the government, declaring there were no changes to the Chequers plan on the table and the EU’s demands on Northern Ireland were “impossible” for the UK to accept. “The PM has set out red lines that this country is not going to stay in the single market, we’re not going to stay in the customs union – I agree with her on those, that’s the government’s position,” Grayling said.

The prime minister was thrown on to the defensive – just over a week before the Conservative party conference – when EU leaders led by Donald Tusk and Emmanuel Macron rejected her Chequers plan as it stood, prompting hard Brexit Conservatives to demand it be abandoned.

May was also set an October deadline for a solution on the Irish border issue just hours after informing Leo Varadkar, the Irish taoiseach, in a private breakfast meeting that she felt it would be impossible to come to a compromise within such a timescale.

A clearly nervous and angry May told reporters that EU leaders were engaged in “negotiating tactics” designed to throw her off course. “I have always said these negotiations were going to be tough,” she said. “And at various stages of these negotiations, tactics would be used as part of those negotiations”.

The assault on May’s plan came shortly after a lunchtime meeting of EU leaders in the Austrian city, where they discussed the Brexit talks in May’s absence. EU council president Tusk declared that Chequers “would not work” while French president Macron said it was “not acceptable”.

A combative Macron accused British Brexiters of lying about how easy it would be to negotiate an exit from the EU on terms favourable to the UK.

“Those who explain that we can easily live without Europe, that everything is going to be alright, and that it’s going to bring a lot of money home are liars,” said Macron. “It’s even more true since they left the day after so as not to have to deal with it.”

May had been forewarned of what they would say a few minutes earlier in a private meeting with Tusk, which she conceded was “frank”. It gave her an hour to prepare for a tense press conference, where May insisted on defending Chequers despite the setback.

The prime minister told reporters that Chequers was the only way to ensure that trade could flow freely across the Irish border after 2019. “Our white paper remains the only serious and credible proposal on the table for achieving that objective,” she said.

Chris Grayling told the BBC’s Newsnight programme: “We’re not going to accept a border between Northern Ireland and the rest of the United Kingdom. We are now preparing hard for the option of a no-deal Brexit. We don’t want to get there, we don’t expect to get there. But our European partners if they want to reach a deal, have to find a way of understanding that there are some things we cannot accept.”

Chequers proposes the UK shares a common rulebook for goods and services after Brexit in an attempt to prevent a return of customs checks for goods crossing the Irish border. But the EU leaders believe it will undermine the single market by giving British companies a competitive advantage and pose a threat to the “European project”.

Will the Chequers agreement survive?

Tusk also issued an ultimatum over the November summit, insisting that progress on a backstop solution for avoiding a hard border on the island of Ireland needed to be made by October or the Brexit talks would collapse. “The moment of truth for Brexit negotiations will be the October European Council,” Tusk said.

“Without an October grand finale, in a positive sense of this word, there is no reason to organise a special meeting in November,” Tusk said. “This is the only condition when it comes to this possible November summit.”

EU sources said the move had been made on the bidding of Macron, who urged taking a hard line over lunch. The French president had been infuriated by May’s warning earlier in the day to Varadkar that she believed a solution on the issue could not be found by October, despite previous promises to the contrary.

The tone of the prime minister’s address to the EU leaders on Wednesday night, during which she attacked Michel Barnier, is also said by sources to have been the cause of irritation.

“They were projecting that Chequers wouldn’t work for them but to do it in this way I thought was pretty disgusting actually. The quicker we can get out, the better.”

May gave no indication that she would change her Brexit policy in Salzburg, and would not say that she believed that a no deal outcome was more likely after the embarrassing summit: “If we get to the position where there will be no deal, the British people can be confident we will do what is necessary.”

Keir Starmer , shadow Brexit secretary, said: “It has been clear for weeks that Theresa May’s Chequers’ proposals cannot deliver the comprehensive plan we need to protect jobs, the economy and avoid a hard border in Northern Ireland. She needs to urgently drop her reckless red lines and put forward a credible plan for Brexit.”