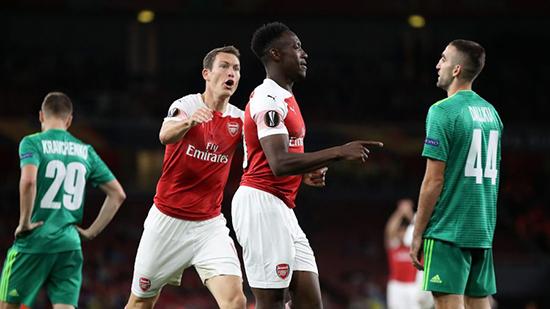 A review of Thursday’s action in the Europa League, where all four British sides involved ended the night satisfied.

Arsenal, Chelsea and Celtic got off to winning starts in their Europa League campaigns while Rangers grabbed an impressive draw at Villarreal.

Alex Iwobi laid the opener on a plate for Aubameyang in the first half and Danny Welbeck headed the second just after half-time.

Aubameyang then hit a fine longe-range effort and sub Mesut Ozil tapped home the fourth before goals from Volodymyr Chesnakov and Vyacheslav Sharpar made the scoreline more respectable for the visitors.

A solitary goal from Willian gave Chelsea a 1-0 win over PAOK Salonika.

The Brazilian winger tucked in a pass from Ross Barkley after seven minutes but despite dominating, the Blues could not find the net again.

Celtic left it late to beat Rosenborg at Parkhead, Leigh Griffiths nodding the winner in the 87th minute.

Steven Gerrard’s Rangers twice came from behind to draw 2-2 away at Villarreal.

Carlos Bacca and Gerard Moreno twice had the hosts ahead but the Scottish side refused to buckle with Scott Arfield equalising first and then Kyle Lafferty scoring his maiden European goal.

In Chelsea’s group Belarus side BATE beat Hungarians MOL Vidi 2-0, while Sporting Lisbon secured a 2-0 win over Qarabag of Azerbaijan in Arsenal’s group.

AC Milan only had a Gonzalo Higuain goal to show for their trip to Luxembourg, running out narrow 1-0 winners against F91 Dudelange. Group F rivals Olympiakos and Real Betis drew 0-0.

Ever Banega and Wissam Ben Yedder scored two apiece as Sevilla racked up a thumping 5-1 win over Standard Liege.

The Spaniards top Group J from Krasnodar after the Russian side downed Turkey’s Akhisarspor 1-0.

Dynamo Kiev were held 2-2 by Kazakhstan side FC Astana after more late drama while an injury-time goal from Hatem Ben Arfa gave Rennes a 2-1 victory at home to Czech outfit FK Jablonec.

In Group A, Bayer Leverkusen had to come from 2-0 down to beat Bulgarian side Ludogorets 3-2 and Zurich won 1-0 at AEK Larnaca of Cyprus.