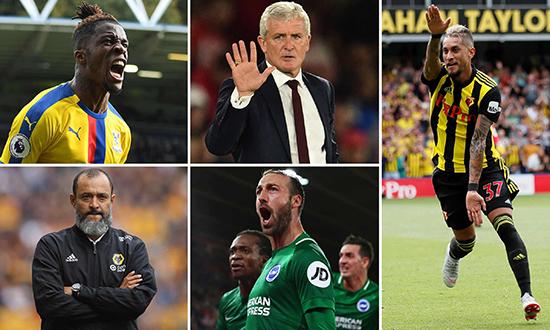 A tale of two forwards at Brighton, Neil Warnock and Pep Guardiola meet again and all eyes on Wilfried Zaha’s treatment

1) Stress for Saints as Anfield awaits

Southampton have a problem. They can’t keep a lead, and have now dropped 13 points from winning positions in just 14 games under Mark Hughes. On Monday night, at home to Brighton, they dominated the first two-thirds of the game, went 2-0 up, then collapsed, allowing Glenn Murray and co to bulldoze their way back. “It is a mental problem. It is a weakness,” said Pierre-Emile Højbjerg after the match. In games where Southampton have set up to attack, such as their win at Crystal Palace, they have looked encouraging, good even. But they simply do not seem to have the personnel or tactical nous to park the bus. Which brings us to Saints’ trip to Anfield this weekend. What will Hughes do? Try and go toe-to-toe with Salah and co, or defend deep and sleepwalk their way to a 3-0 defeat? MB

2) Will Wolves go on the attack in Manchester?

When Wolves travel to Old Trafford on Saturday, they will surely take confidence from how they performed in the 1-1 draw with with Manchester City last month. Nuno Espírito Santo’s side unnerved the champions with their fearless approach and, having secured consecutive wins over Burnley and West Ham, they can be reasonably confident about their chances of causing Manchester United a few problems. But while Wolves are unlikely to park the bus, they will have to take care not to play into United’s hands. José Mourinho’s side, fresh from three away wins, would like nothing more than for the visitors to show naivety by leaving space for Jesse Lingard, Romelu Lukaku, Paul Pogba and Alexis Sánchez to exploit on the break. JS

3) A tale of two forwards in Brighton v Tottenham

We will never know for sure, but the odds are that Glenn Murray would have a World Cup Golden Boot on his mantelpiece now if Gareth Southgate had taken him to Russia last summer, because Harry Kane did nothing there that Murray could not have. Instead of being acclaimed as a kind of English Roger Milla, Murray remains an uncapped wonder, but he has outscored Kane in the Premier League so far this season and will fancy his chances of finding the net on Saturday, three days before his 35th birthday. It will be interesting to see whether Mauricio Pochettino persists with starting Kane, who has been out of form for months, and whether Kieran Trippier and Toby Alderweireld are restored to Tottenham’s defence after being left out of the midweek Champions League squad for “technical reasons”. What is certain is that Chris Hughton will do his utmost to ensure Brighton make a strong start, because they have had to fight back from two-goal deficits in each of their last two games, and because Spurs have looked uncharacteristically ragged recently. PD

4) How will Newcastle handle Zaha?

Opinions are split on whether Wilfried Zaha is receiving too much rough treatment from defenders. The Crystal Palace forward’s supporters will point to that disgraceful foul by Watford’s Étienne Capoue as evidence opponents are trying to kick the Ivorian out of games; yet Zaha’s detractors will say he invites uncompromising challenges because he goes to ground too easily. Either way, the spotlight will be on the officials when Palace host Newcastle. Zaha has taken his complaints public and Palace feel so strongly about the issue that they have raised it with the Premier League. Rightly or wrongly, Newcastle’s defenders will think they can get in Zaha’s head and put him off his game. But will Andre Marriner, the referee, be on the lookout for those kind of tactics? JS

5) Warnock and Guardiola to resume hostilities?

Pep Guardiola takes Manchester City back to Cardiff for what promises to be an ill-tempered reunion with Neil Warnock. The Cardiff manager has toned down his warmongering ways in recent years but his short relationship with Guardiola has not been a happy one. It got off to a good start when the Spaniard, preparing for the teams’ meeting in last season’s FA Cup, turned up to watch Cardiff’s third-round replay. “I love watching Guardiola’s teams,” trilled Warnock. “Turning up at Mansfield was a bit of class.” But then the game that followed was bad-tempered and memorable mainly for Joe Bennett’s horror tackle on Leroy Sané. “Please, for the sake of football, protect the players,” Guardiola said afterwards. An affronted Warnock countered that Kevin De Bruyne was guilty of a worse challenge, on Jazz Richards and then returned to the theme when Fabian Delph was sent off against Wigan in the following round for a tackle that “was 10 times worse than Bennett’s”. Though Warnock bought a new left-back two days after the City game and ordered Bennett to train alone, he was not out of the team for long, has played every minute of Cardiff’s first five games this season and is line for a reunion with Sané. “I meant to bring him down but not catch him in the way I did,” he said of the tackle. SB

6) Pereyra the vital cog for Watford

In case you missed it, Troy Deeney was on Monday Night Football this week and his usual self: honest, uncompromising and a breath of fresh air. When asked who the best player Deeney has ever played with, he stumped for Roberto Pereyra. “People act like we’ve just found him off the street,” Deeney said. “He’s frightening, he can do anything.” Signed from Juventus two years ago, the Argentinian has now become Watford’s most important player since Richarlison’s departure to Everton, adding finesse and craft to Deeney’s graft, while providing a much bigger goal threat cutting in on his right foot. His understanding with José Holebas has also been crucial to Watford’s start this season: the pair contributing three goals and four assists between them. MB

Chelsea, like Manchester City, have received just four bookings this season, a league low. Each Premier League team has, on average, been shown 8.1. The third most-cautioned team in the division is Brighton, with 10, and Watford are at No 2 with 12. West Ham have earned 18. It is not possible to blame the rogue thuggery of a couple of miscreants for this situation. West Ham excepted, the average Premier League club has so far had 5.8 different players booked this season. Southampton and Manchester United have each had eight players booked and Everton, second on the list of offenders, have had nine. Fourteen different West Ham players have already been booked in league games. Strangely, this is despite the fact they are only ninth on the list of most fouling teams in the top flight, conceding 58 free-kicks (excluding offsides). Individually, Glenn Murray has committed 20 fouls, most in the division. Felipe Anderson, Arthur Masuaku, Marko Arnautovic and Fabián Balbuena, West Ham’s fouliest players, are joint 44th, having between them committed only fractionally more (24) than Murray alone. So what is going on here, and is there some dastardly refereeing bias at play? It would seem not, because the really strange thing is the identity of the most-fouled team in the top flight, the one awarded more free-kicks than any other: it’s West Ham. SB

The obvious conclusion to draw from Everton’s mini-slump is that they are going to rely heavily on Richarlison this season. The Brazil international hit the ground running at Goodison following his £40m move, scoring twice in the 2-2 draw with Wolves on the opening day and a winner against Southampton a week later, but Marco Silva’s side have sorely missed the 21-year-old’s pace and trickery since his foolish red card at Bournemouth last month. Everton’s attack has congealed without the forward, who made his international debut earlier this month, and last weekend’s defeat to West Ham extended their winless run in the league to three matches. Silva will be relieved to have his main summer signing available again for Sunday’s daunting trip to Arsenal. JS

The fact Joe Hart has made more saves than any other Premier League goalkeeper can be attributed as much to Burnley’s rotten form than any salient points about his encouraging performances of late. But although the 31-year-old hasn’t been able to keep Burnley from propping up the table, he has been excellent, particularly last weekend at Wolves where he got a standing ovation at full-time from the home fans in Molineux’s South Bank and even gave his shorts to a delighted Wolves fan. Talk of an England recall is premature but at a club where Tom Heaton and Nick Pope have recently done enough to work their way into Gareth Southgate’s thoughts, Hart is doing a good job at Burnley of reminding people of his best qualities. Saturday’s game against in-form Bournemouth should mean another busy day between the sticks. MB

10) Enough bite for the Terriers at Leicester?

Leicester have won eight and lost none of the last nine league meetings, and have not lost a home league game to Huddersfield since 1954. But they come into this match bruised after conceding four at Bournemouth last week, and with Wes Morgan suspended. Jonny Evans is a more than able deputy, but Claude Puel admits his other key centre-back, Harry Maguire, is struggling to rediscover his “focus and freshness and concentration” after a World Cup-affected summer break. “If I rest him for this game and we lose, I know I will be criticised,” said Puel. Maguire has been booked three times this season, and though one was for taking off his shirt after scoring a stoppage-time winner at Southampton, it is notable that in none of the last five years has he reached that tally before Christmas. So this might be a good time to face Leicester, although Huddersfield, who have scored the fewestPremier League goals and taken the fewest shots (joint with Newcastle), may not have the attack to take advantage. SB