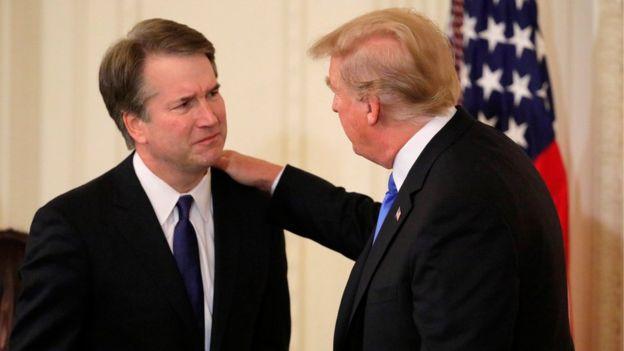 The Party needs to fight Supreme Court battles in a way that is consistent with its principles—and reject as many untenable nominees as Trump names.

For a President whose Supreme Court pick was in serious jeopardy last week, Donald Trump seemed, at least initially, almost blasé. As he left the White House, on Wednesday, to survey the hurricane damage in North Carolina, he said that it was “very unfair” that Brett Kavanaugh, his “outstanding” nominee, had to contend with Christine Blasey Ford’s allegation that he had sexually assaulted her when both were in high school. Ford has said that the attack derailed her, socially and academically, for years; Kavanaugh has denied that he was involved in any such incident. “Very hard for me to imagine that anything happened,” Trump noted, as though he, like too many other men who hear a woman’s story, including stories about Trump himself, could barely be bothered to sort out the details.

That was a task for someone else, though not, as Ford’s advocates hoped, for the F.B.I. “Let the senators do it. They’re doing a very good job,” Trump said, with a shrug. He added, referring to the possibility that Ford would appear before the Senate Judiciary Committee this week, “Look, if she shows up, and makes a credible showing, that will be very interesting, and we’ll have to make a decision.” By “we,” Trump meant “I,” and his comment pointed to one aspect of the ugly shambles of the Kavanaugh nomination which is beyond dispute. In a few years’—if not a few weeks’—time, there will be another set of confirmation hearings. There always is, and each is shaped by the previous one, as the parties refight the latest war on a new plain of legal writings and personal backgrounds.

Such contentiousness, though, is not the same as wisdom gained. Twenty-seven years after Republicans on the Senate Judiciary Committee lacerated Anita Hill, and then voted to confirm Clarence Thomas, who she said had sexually harassed her when he was her boss, the committee clearly has not yet figured out how it should deal with issues that fall under the broad umbrella of #MeToo. But neither have the two parties figured out how to deal with the issue of Donald Trump, a volatile bigot who expects his Attorney General to solve his multifarious legal problems, and who, some fear, may expect his Supreme Court appointees to do the same.

“Look, when I first decided to run, everybody said the single most important thing you do is the Supreme Court Justice,” Trump said on Wednesday. The election gave him that power, with the help of a slim Republican majority in the Senate. That is part of the tragedy of 2016, and the Kavanaugh hearings have served as a sour reminder of it. Then again, the midterms are just a month and a half away. Senator Lindsey Graham, Republican of South Carolina, succinctly expressed G.O.P. concerns about November last week, saying that the calls for the F.B.I. to investigate Ford’s allegations are “not about finding the truth, but delaying the process till after the midterm elections.”

The truth matters more than the midterms, but Graham’s charge, which Trump echoed in furious tweets on Friday, raises a useful question. Do the Democrats have a post-midterm Supreme Court game plan? They need to reckon, first, with the possibility that they will not like the election results. If Kavanaugh is not confirmed, Trump will likely let out a long wail of aggrievement, urging his base to send him more loyal senators. And, come November, the base might deliver.

If so, there is little reason to hope that a post-midterm Republican majority—one more indebted to Trump—would do better than the current one, which sped through the first part of the Kavanaugh hearings. The Republicans ignored not only his extreme views on issues such as executive power, gun control, and reproductive rights but his obfuscations, if not outright lies, to the committee. While the Republicans treated these substantive problems with an unseemly indifference, the Democrats, for their part, wasted some time and credibility with grandstanding forays. President Trump may think that the senators are doing “a very good job,” but they themselves can’t honestly think so.

A number of recent factors have pushed the process to its current state. First came the dishonorable treatment of Barack Obama’s nominee Merrick Garland, whom Mitch McConnell, the Senate Majority Leader, refused to grant even a hearing, leaving a seat open for more than a year, and ultimately for Trump to fill. Then, to get Trump’s first nominee, Neil Gorsuch, confirmed, McConnell engineered the end of the filibuster to oppose Supreme Court nominations—the number of votes needed to confirm, in a practical sense, dropped from sixty to fifty-one, making moderate nominees less relevant. Both acts have in common an overriding circumstance: the willingness of the G.O.P. to defer to Trump. The midterms, again, may only make that worse.

But there is a chance that the Democrats will take the Senate; that’s why Graham and his colleagues are so worried. What would the Democrats do then? One option would be to keep a Court seat open for the next two years, or the next six, if Trump is reëlected. But, if what was done to Garland was dirty and wrong—and it was—that is all the more reason for the Democrats not to emulate it. And, while they might energize their own base, it could mean losing what’s left of the middle, and of the Court’s legitimacy. They need a better strategy than mimicking Mitch McConnell.

Rejecting as many untenable or extreme nominees as Trump comes up with, though—taking them one at a time, giving each a fair, open-minded hearing—would make sense in a way that blind delay does not. If Kavanaugh’s confirmation fails, no one should expect that Trump’s next pick would be entitled to a seat. After Robert Bork’s nomination was defeated, in 1987, largely on the basis of his extreme jurisprudence, Ronald Reagan’s next choice, Douglas Ginsburg, withdrew after reports of his marijuana use emerged. That opened the door for Anthony Kennedy, who, as it happened, was worth holding out for. It also took Richard Nixon three tries to come up with a confirmable replacement for Abe Fortas, before succeeding with Harry Blackmun, the Justice who wrote the decision in Roe v. Wade. The Democrats need to win such fights in a manner that is consistent with their principles and their identity. To do that, they will need to clearly define themselves, an exercise that can only help them with the task they must achieve if they really want the job of shaping the courts: winning elections. ♦

This article appears in the print edition of the October 1, 2018, issue, with the headline “The Next Confirmation.”