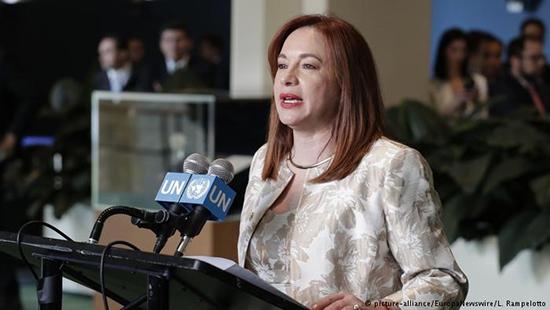 DW: Ms Espinosa Garces, what are the aims of your presidency?

Espinosa Garces: The emphasis in this session is on strengthening the UN and making it more relevant to all people. By this we mean that we want to bring the organization closer to the people, and the people closer to the organization. The United Nations is doing tremendous work. Sometimes it’s not enough, but it does a great deal that is not understood by the general public. Why is that so? Because we speak in a self-referential language that’s full of incomprehensible abbreviations. We have to translate our work in such a way that it has significance for ordinary people, so they realize that this organization exists in order to solve the problems of humankind. To find a way of acting together, capable of meeting the global challenges we face. Whenever we talk about climate change, AIDS, tuberculosis, hunger, poverty or securing peace, we also talk about the UN, with all its bodies and programs.

Taking a self-critical approach, now that you’ve assumed office, what would you tackle first? Where does the UN need to change in order to improve its image in the public’s perception?

A process of reform is already underway. The challenge lies in implementing this reform. It’s about creating a new architecture for the institution, particularly in the areas of peace and security as well as the development system, in order better to be able to fulfil the “Agenda 2030” and meet its sustainability goals. Issues like migration and accommodating refugees will play an important role in this session, as will questions of gender equality and the subject of decent employment. I think that these are just some of the biggest challenges today’s societies are facing.

How is the United Nations’ relationship with the United States, and in particular with its president, Donald Trump? The UN’s most important financial backer is currently taking a nationalist and protectionist stance, in other words, one that runs counter to that of the United Nations.

I am convinced that multilateralism is not an option but an obligation when we talk about problems of global significance and scope. This applies to disarmament, fighting the scourge of AIDS, climate change, or global migration flows. It’s understandable that different countries take different positions, but we must be aware that there are issues that require the taking of collective measures. The UN General Assembly is the parliament of humanity. All the countries sit on the same chairs, speak into the same microphones and vote by pressing on the same buttons. It is the most democratic platform in the world, and I hope the differences of opinion can also be resolved here through respectful dialog.

You’re from Ecuador, and you’re the first woman from Latin America to head the General Assembly. There are currently two major crises in Latin America: in Nicaragua and in Venezuela. Do people expect you to do something in the UN General Assembly that will contribute to resolving these crises?

Being the first Latin American woman to hold the presidency of the General Assembly is an honor. It’s also a big responsibility. Expectations are really high. Sometimes I think people are expecting me to achieve world peace within 72 hours and stop climate change in a month. For my part, I resigned from my post as Ecuador’s foreign minister in order to dedicate myself to the General Assembly around the clock. But the General Assembly’s agenda is defined by the member states. We observe and address crises and problems not just in Latin America but in all the 193 countries represented in the General Assembly. And we try to contribute to solutions for all of them that are guided by the fundamental principles of the United Nations Charter, namely: development, peace, security and human rights.

The former foreign minister of Ecuador, Maria Fernanda Espinosa Garces, became the president of the UN General Assembly for its 73rd session at the start of September 2018. She will be in office for one year. Espinosa Garces is the first Latin American woman, and only the fourth woman overall, to hold this office.