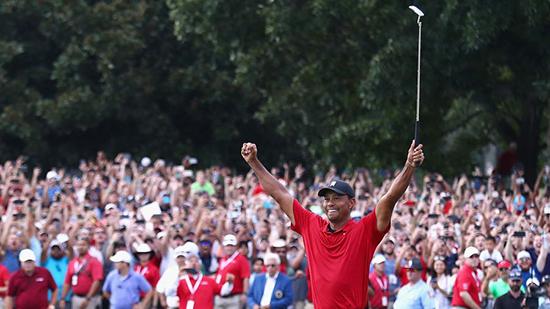 It marks a remarkable return to the top for Woods, who was ranked world number 1,199 less than a year ago after having spinal fusion surgery.

“I had a hard time not crying on the last hole,” Woods told NBC. “I had to suck it up and hit some shots. Once I got the ball on the green, it was done. I could handle it from there.”

The 14-time major champion’s last tournament victory was in August 2013 in the WGC-Bridgestone Invitational.

“It was just a grind out there,” Woods added. “I loved every bit of it, the fight, the grind and the tough conditions.

“At the beginning of the year, it was a tall order but as the year progressed and I proved I could play, I knew I could do it again.”

He came into the final day of the tournament – the last of four FedEx Cup play-off events – with a three-shot lead over Rose and Northern Ireland’s Rory McIlroy, who faded from contention with a 74 to finish on five under in tied seventh.

Woods birdied his first hole – one of two birdies and three bogeys – with his place at the top of the leaderboard in little danger during the final round.

“I just can’t believe I pulled this off after what I’ve gone through,” added an emotional Woods. “It’s been tough. I’ve had a not-so-easy last couple of years. I’ve worked my way back. I couldn’t have done it without the help of all the people around me.

“Some of the other players knew what I was struggling with. It was really special to see them at the green on 18. It’s just hard to believe I won the Tour Championship.”

The win for Woods, who is part of the United States team for next week’s Ryder Cup in Paris, means he is now two short of Sam Snead’s all-time PGA Tour title record of 82.

It comes less than a year since Woods said he might never return to competitive golf following multiple back operations.

In April 2017 he had his third surgery in 19 months to try and cure pain in his back and leg.

He returned to competitive golf in November 2017 and admitted he was “winging it” as he waited to see if his back would hold up.

“I’ve been in bed for about two years and haven’t been able to do much,” Woods said before the Hero World Challenge, where he would finish ninth in the 18-man field.

Back on the PGA Tour in 2018, Woods missed the cut in his second event but crucially felt fit enough to add tournaments to his schedule and the results soon followed, most notably when he led the Open Championship at Carnoustie with eight holes to play and then finished runner-up in the US PGA Championship.

“It was just a matter of time and I’m so happy for him.”

Rose nearly ‘throws it away’

Rose – whose one PGA Tour victory in 2018 came at the Forth Worth Invitational in May – entered the FedEx Cup play-offs fourth in the points list behind Dustin Johnson, Justin Thomas and Brooks Koepka.

After missing the cut at the opening Northern Trust tournament, he finished second in both the Dell Technologies Championship and the BMW Championship.

Rose, Tony Finau, Johnson, Bryson DeChambeau, defending champion Thomas and Woods all came into the Tour Championship with a chance to win the FedEx Cup bonus with a victory at East Lake.

With Woods looking certain to win the tournament, a top-five finish for Rose was going to be enough for the world number one to claim the overall title.

However, bogeys on the 11th, 14th and 16th saw Rose slip out of the top five and Woods was set to secure the FedEx Cup in addition to the Tour Championship.

Rose, 38, needed a birdie on the par-five 18th to finish joint fourth with Japan’s Hideki Matsuyama and claim the title.

“I was waiting for a break all day and to get it on the last hole was great timing,” said Rose, a European Ryder Cup team member. “I felt more pressure as I was throwing it away. It was a horrible scenario but fortunately I clicked into gear at the right time.

“Today is going to take a lot of absorbing but I can’t wait to go over to Paris.”

‘The greatest comeback of all time’ – reaction

English world number 12 Tommy Fleetwood: “Everybody watching at home, everybody that was right there when it happened. We’ve just witnessed the greatest comeback of all time! What a time to be alive!!!”

18-time major champion Jack Nicklaus: “I never dreamed Tiger Woods could come back and swing the way he has, after surgery. I think you could argue he’s swinging better than he has ever in his life. He has played fantastically! I think throughout this year some of Tiger Woods’ issues were between his ears, as he had to remember how to win again. Tiger has been close, almost there. You knew he was going to win soon, and this week he did it.”

When Woods last won a tournament in August 2013…

April 1997: Wins his first major championship at the Masters

June 1997: Becomes world number one for the first time, less than a year after turning professional

June 2008: Wins his 14th major championship at the US Open to move within four of Jack Nicklaus’s record of 18

November 2009: His car hits a tree and fire hydrant outside his Florida home, leading to revelations about what he calls “transgressions” in his private life

August 2010: He and wife Elin Nordegren announce they are divorced

August 2013: Wins his 106th global title and 79th on the PGA Tour at the WGC Bridgestone Invitational

May 2016: Falls out of the top 500 in the world rankings for the first time as a professional, eventually reaching as low as number 1,199 in December 2017

April 2017: Has spinal fusion surgery, the third surgery in 19 months to try and cure pain in his back and leg

May 2017: Is arrested and charged with driving under the influence after being found asleep at the wheel of his car with the engine running.

September 2018: Is named as a wildcard pick for the 2018 Ryder Cup to return to the side for the first time since 2012, a month after finishing second at the PGA Championship.