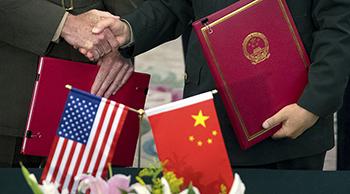 The Sino-American trade conflict has entered a new stage, after the latest tit-for-tat tariff hikes, targeting in total some $260 billion-worth of bilaterally traded goods, has officially come into effect.

Beijing blames American protectionist policies for the escalation of the trade conflict between the world’s largest economies. Washington for its part maintains that China’s theft of intellectual property and technology, as well as wide trade imbalance, have led to the increased tensions.

The latest round of tariff hikes raises the stakes in the trade battle. In late July and August, the countries already introduced additional levies against roughly $50 billion-worth of each other’s goods. Despite fears voiced by America’s big business community, warning against the latest round of sanctions, Donald Trump on Friday threatened Beijing with further punitive measures, should China retaliate against Washington’s actions, instead of bowing down to the pressure. While Trump did not go into details, the White House previously expressed its readiness to target some $267 billion of Chinese goods.

“The trade war by China against the United States has been going on for years,” Secretary of State Mike Pompeo told Fox News on Sunday. “Here’s what’s different in this administration. To the extent one wants to call this a trade war, we are determined to win it.”