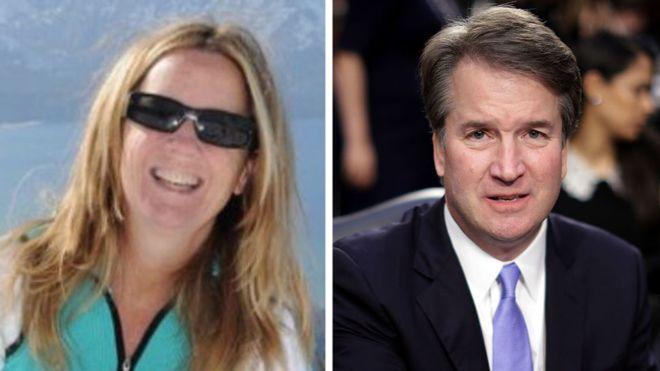 President Trump inadvertently spawned a new and trending hashtag after questioning why Professor Christine Blasey Ford did not report her alleged sexual assault by his Supreme Court nominee when it happened 36 years ago.

In one of a series of tweets on Friday, he said: “I have no doubt. that, if the attack on Dr Ford was as bad as she says, charges would have been immediately filed…”

There was a swift response.

Under the hashtag #WhyIDidntReport, thousands of women began recounting why it took them many years to talk about their attacks. By Sunday, there had been 675,000 tweets.

Many spoke of feeling ashamed or powerless, of reporting their attacker but not being believed, of years of trauma trying to process what had happened to them or trying to forget about it.

“I was sexually assaulted twice. Once as a teenager. I never filed a police report and it took me 30 years to tell my parents,” actress and activist Alyssa Milano tweeted in response to Mr Trump.

Ms Milano later wrote in a first person piece in Vox: “For me, speaking up meant reliving one of the worst moments of my life. It meant recognising my attacker’s existence when I wanted nothing more than to forget that he was allowed to walk on this earth at all.

“This is what every survivor goes through. Telling our stories means being vulnerable to public attacks and ridicule when our only “crime” was to be assaulted in the first place.”

Patti Davis, the daughter of Ronald and Nancy Reagan, wrote a piece in the Washington Post to explain why victims of sexual assault do not always remember the finer details.

She defended Prof Ford’s lack of recall for some of the events of the night in 1982 when she says Brett Kavanaugh, then aged 17, attempted to rape her, aged 15, at a party in Maryland – a claim he has strenuously denied.

“Your memory snaps photos of the details that will haunt you forever, that will change your life and live under your skin. It blacks out other parts of the story that really don’t matter much.

Author Deborah Copaken also defended Prof Ford in the Atlantic, and pointed out that the power Brett Kavanaugh would have as a Supreme Court judge meant it was vital that her allegations were taken seriously.

She described how she had been able to forgive her rapist after he showed deep remorse when she confronted him about it 30 years later.

“But you know what? If he were being confirmed for the Supreme Court; if his decision over what would happen to my daughter’s body, should she become inadvertently pregnant, would tip the scales away from Roe; if one of the key aspects of his job as a judge would be to show and to have shown good judgment over the course of his life, you better believe that I, like Ford, would come forward and tell the committee,” she wrote.

All eyes on Thursday’s hearing

Prof Ford has agreed to testify next Thursday before the Senate Judiciary Committee, which is considering whether to confirm Brett Kavanaugh’s nomination to the Supreme Court.

Many will see her as brave, telling the world about an alleged event she has spent her life trying to forget amid public vilification and death threats.

But she will also face great scepticism, not least from some of the Republican members of the judiciary committee who will question her on Thursday.

One of them, Lindsey Graham, told Fox News Sunday he did not expect her testimony to change his mind.

“What am I supposed to do? Go ahead and ruin this guy’s life based on an accusation?” he said. “Unless there’s something more, no I’m not going to ruin Judge Kavanaugh’s life over this.”