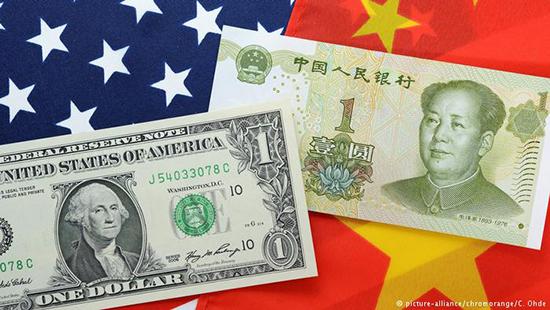 Amid intensifying trade friction between Washington and Beijing, a new round of US tariffs took effect on Monday, raising the stakes for both sides. China seems to have several tools up its sleeve to counter US tariffs.

Escalating trade tensions between the world’s two most powerful economies have cast a dark shadow over the global economic climate. On Monday, the United States and China imposed fresh tariffs on each other’s goods, with the US levying import taxes on $200 billion (€169.64 billion) worth of Chinese goods and Beijing retaliating with tariffs on $60 billion worth of US products.

Donald Trump has already hinted at the possibility of slapping tariffs on all US imports from China.

Trump’s latest tariffs come in addition to those he has imposed on over $100 billion of imports already, including on steel, aluminum, solar panels, washing machines, and the initial volley of $50 billion on products from China.

China has asserted that it won’t back down and will retaliate against Trump’s tariffs by matching them dollar for dollar with its own. But Chinese exports to the US are nearly four times the amount of US exports to China.

In 2017, goods and services traded between the two giants totaled an estimated $710.4 billion, according to the Office of the United States Trade Representative. While exports from the US to China were worth about $187.5 billion, imports to the US from China were as high as $522.9 billion and resulted in a massive trade deficit amounting to some $335.4 billion.

Given the deficit, the Trump administration’s thinking seems to be that Beijing might not be able to engage in a tit-for-tat escalation on tariffs as it would eventually “run out” of products to target with tariffs long before the United States does.

But some observers believe that China has other options to impose pain on the US.

Experts like Nicholas Lardy of the Washington-based Peterson Institute for International Economics, for instance, point out that Beijing could target American businesses operating in China and harass them with regulatory hurdles. This might take the form of delays issuing clearances for US products at Chinese ports, lengthy customs and safety inspections as well as visa rejections.

The Chinese government could also promote consumer boycotts of US goods as has happened with Japanese and South Korean products in previous geopolitical disputes.

Such a move could prove devastating to some American firms that have large exposure to the Chinese market. “Apple’s $40 billion market in China for iPhones, the largest in the world, could quickly collapse,” Lardy wrote in a research note in June. “Similarly, General Motors sells more cars in China than in the United States, sales that could easily be disrupted by the Chinese government.”

Another way China could hurt US interests is by withholding regulatory approvals that are critical for ensuring the commercial future of American firms.

US tech multinational Qualcomm offers a case in point. The company was recently forced to call off its $44 billion effort to buy NXP Semiconductors, a Dutch chip maker, after Chinese regulators withheld approval of the transaction.

Renminbi and US bonds

Beijing could also allow the renminbi, the Chinese currency, to depreciate further against the US dollar, making Chinese goods cheaper in the United States and partly offsetting the tariffs.

The renminbi’s value against the US dollar has already declined by 8.5 percent since April, estimates Capital Economics. This depreciation “gives exporters leeway to lower dollar export prices to offset the tariffs’ impact (the new batch of tariffs will only be 10 percent initially),” Mark Williams, Chief China Economist at the London-based research consultancy, wrote in a report. “It should also help make exports more competitive globally.”

But currency depreciation is a double-edged sword. Experts say a weaker renminbi could make China’s imports more expensive, raise inflationary pressures and result in capital flight out of the country. Furthermore, any deliberate move to depreciate the renminbi is likely to draw an angry response from the Trump administration.

Analysts say China could also sell US assets, particularly Treasury bonds, in a bid to pressure Washington. Beijing holds over $1 trillion of US government bonds, but has been cutting back on its holdings over the past several years. China has slashed its Treasury holdings by 10.2 percent since late 2013.

But if China continues to reduce its holdings and abruptly sells US debt, it would not only hurt Washington but also Beijing as it would lead to a loss in value of an asset that China holds a lot of. If the US bonds sold by China are bought by other countries and private investors, then the impact of such a move by Beijing would be limited on Washington.

“Beijing wields considerable power as the United States’ biggest creditor and could decide to shed some of its US government bonds. Yet that’s an unlikely course of action given the risks to the Chinese currency and the entire financial system,” according to Max J. Zenglein, senior economist at the Berlin-based Mercator Institute for China Studies (MERICS).

Some argue that China’s best option for responding to a trade war is by focusing on reforming and reconfiguring its domestic economy.

“While the Chinese government may try to respond to American tariffs by depreciating its currency or using regulations to discriminate against US companies, those measures have little guarantee of success,” Michael Pettis, finance professor at Peking University and a senior associate at the Carnegie Endowment, wrote in Barron’s. “The better approach would be to focus on raising the incomes of ordinary Chinese so they can spend more.”

MERICS expert Zenglein thinks that the new tariffs put extra pressure on the Chinese economy. “The Chinese government is currently trying to tackle problems such as rising debt, industrial overcapacities and environmental degradation. Thus the new tariffs come at a time when the government can ill afford economic growth to slow too quickly.”