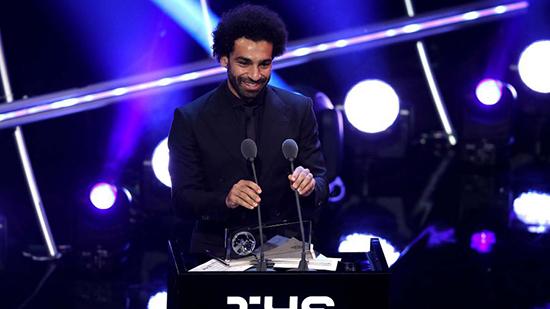 Liverpool star Mohamed Salah won the FIFA Puskas Award for the goal of the season for his strike in last season’s Merseyside derby against Everton at Anfield, but he missed out on a place in the team of the year.

Ten goals were shortlisted for the award, with many pundits predicting a win for Gareth Bale’s acrobatic volley in the Champions League final for Real Madrid against Liverpool.

But the Egyptian star’s effort, which saw him spin past two Everton players before curling a left-foot shot into the far corner, gained 38 per cent of the more than 500,000 votes cast.

The award, which is named after Hungary and Real Madrid great Ferenc Puskas, was the first announced at the Best FIFA Football Awards in London.

The 49-year-old was up against Croatia coach Zlatko Dalic, whose side lost to France in the final in Russia this summer, and Zinedine Zidane, who led Real Madrid to a third straight Champions League win.

Deschamps’ win was no surprise, given the focus on Russia 2018, and he used his acceptance speech to warmly thanks his backroom staff and players.

Deschamps said: “I want to thank the president of the French Federation who trusted me and helped me work serenely.

“We all know that being a coach, alone we can’t do anything. We are nothing without our players and I want to thank my whole team who worked to get me here and get me this trophy tonight.”

Now with Real Madrid, the 26-year-old Courtois joked before his award was announced that FIFA should also hand out a save-of-the-year prize.

Courtois said: “I want to thank my team-mates at Chelsea, at Real Madrid and the national team – also my managers.

“Also I want to thank especially my family, my friends – they always stand by me in the good times, the bad times, but they are always there for good advice, so thank you everyone.”

No Salah in FIFPRO World 11 team

The dream team was put together by votes from 25,000 professional footballers from more than 65 countries.

Luka Modric and Kante were picked in a two-man midfield, with Lionel Messi, Kylian Mbappe and Hazard in front of them and Cristiano Ronaldo up front.

Hazard said: “I’m just proud to be next to these kind of players.

“They are all top players in the world. Some of them are friends of mine and I’m just happy to be here.”

His Chelsea team-mate Kante was also thrilled to be included.

The 32-year-old, who now plays her club football for Orlando in the United States, has scored 110 goals for Brazil.

This, however, was her first world player-of-the-year accolade since 2010, although she has been runner-up three times since, and her emotion at winning the prize was obvious during her acceptance speech.