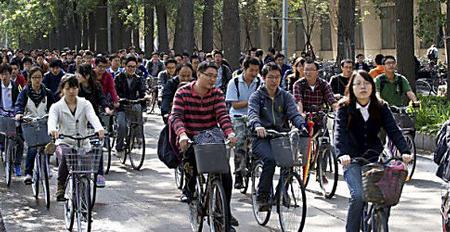 The phoney (trade) war has been going on for many months since Donald Trump first threatened and then began to unleash tariffs against China and others; so much so that financial markets – the US stock market in particular – have begun to believe that the scare is indeed “phoney.” It is not, and that truth is about to dawn.

The global economic expansion of recent times “may now have peaked” with growth becoming slower and less broad-based, the Organisation for Economic Co-operation and Development (OECD) said in its latest Interim Economic Outlook. If that does not give financial markets pause for thought, then the OECD’s comments about what is behind this slowdown certainly should.

Global trade growth slowed in the first half of 2018 to 3 per cent, from 5 per cent a year earlier. Trade tensions are already having adverse affects on confidence and investment plans, the September 20 report noted. And that was even before the US and China began announcing reciprocal trade assaults on each other.

Make no mistake, this is bad news. It was a pickup in world trade growth in the second half of 2016 that reversed what International Monetary Fund (IMF) managing director Christine Lagarde and others had up to then described as a dreary post-2008 financial crisis period in which global growth had been “too low for too long.”

Enter Donald Trump at the end of that year declaring his intention to use the tariff weapon to restore US international competitiveness and that “trade wars are easy.”

It has taken some time for the effects of this absurdly simplistic doctrine to show through on trade and investment, and equally long for markets to grasp the threat.

Now, it is happening. Not only has trade growth slowed, with the strong prospect that it will slow further and faster from here on as the Trump tariffs begin to bite harder but also – and this too is ominous for the future – new orders for capital equipment and merchandise have also slowed, as the OECD notes.

Those commentators who insist on treating what is happening in the world of trade as incidental to the seeming robustness of the US economy and of US stock prices – as a mere day to day risk-on risk-off situation – need to pay attention to what the OECD (which is better known for lucid and sober analysis than for scare mongering) has to say.

“Recently introduced restrictive trade policy measures have already resulted in marked changes in trade flows and prices in targeted sectors,” according to the Paris-based group. “Policy announcements have also adversely affected business sentiment and investment plans, reflecting uncertainty about the possible disruption to supply chains and the risk that restrictions may intensify.”

A further rise in trade tensions , the OECD suggests, “would have significant adverse effects on global investment, jobs and living standards. “ And, by extension, that means a significant adverse impact also upon stock and other financial market prices that ultimately reflect what is going on in the real economy.

Where trade leads (or lags) the world’s economic fortunes follow, as has been painfully obvious (except perhaps to Mr Trump and his trade war apostles) ever since the Great Depression which followed the imposition of the so-called Smoot-Hawley tariffs in 1930.

Even with the impact of the Trump tariffs beginning to take a toll now on trade, investment and orders, the string in the tail is still to come with the more insidious and long-lasting impact on global manufacturing supply chains. These have greatly complicated and obscured the mechanisms of international trade in recent times.

Supply chains link a vast network of hundreds of thousands of component suppliers with major assembling companies around the world, and the impact of tariffs on the core companies reverberates in time throughout the global economy. Mapping the complexity of and potential impact on this network could take a long time.

Even if Trump and his aides were aware of all this, the question is, do they really care, or is the global agenda being subjugated to a US agenda?

Maybe we have not looked close enough at what he means by an “America First” policy, and whether it implies something beyond just ensuring “free and fair” trade from a US perspective. His insistence on substituting bilateral deals for multilateral agreements allows the US to make free trade and tariff-free access to US markets conditional upon all kinds of things that once had no place in trade and investment accords (although there was a creeping US tendency toward “agenda” promotion even before Trump).

The Trump administration, for example, is expected to push for safeguards against “currency manipulation” in upcoming bilateral negotiations with the European Union and with Japan among others. And, it is likely that it will try to make bigger host country contributions to partner country security a part of such deals too.

Viewed in this light, trade wars can be seen as proxy wars for something bigger – a move to readjust the balance of geostrategic and economic power back in favour of the US (including chopping the legs off competitors via tariffs to make the US look bigger.

This is a dangerous game, and the world needs to wake up to it.