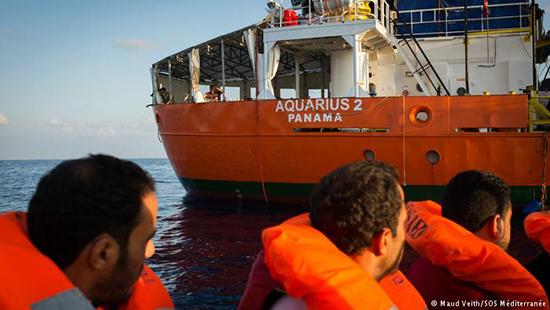 The French government has said it will not allow the Aquarius 2 migrant rescue ship to dock in Marseille. The ship has been repeatedly turned away by Italy and forced to stop in Malta and Spain in recent months.

The French government wants the ship Aquarius 2 to take migrants picked up off the coast of Libya to seek “the nearest safe port” rather than continue its journey to the southern French port of Marseille.

The ship — run by SOS Mediterranee and Doctors without Borders (MSF) — has 58 migrants on board. Currently near the Libyan coast, it is the last private rescue vessel operating along the trafficking route in the central Mediterranean.

France has repeatedly said that under international law, rescue ships saving people at sea must dock at the closest port. The United Nations says Libya — where armed militias have fought for influence and control since 2011, when an uprising evolved into a civil war — does not qualify as a safe place for rescued migrants.

Asked on Tuesday morning whether France was willing to allow the rescue ship to dock in Marseille and allow the dozens of migrants on board to disembark, French Finance Minister Bruno Le Maire said “For the moment it’s ‘no.'”

France’s government spokesman, Benjamin Griveaux, tweeted that the solution will come from “cooperation with our European partners.”

SOS Mediterranee said on Monday its “only option” was to head to Marseille where the NGO is headquartered.

“We alerted other countries, but we find it hard to imagine that France would refuse, given the humanitarian situation,” said the NGO’s head of French operations, Francis Vallat.

“For the past two years, European leaders have claimed that people should not die at sea, but at the same time they have pursued dangerous and ill-informed policies that have brought the humanitarian crisis in the Central Mediterranean and in Libya to new lows,” said MSF’s head of emergencies, Karline Kleijer, in a statement.

This year, according to the UN Refugee Agency (UNHCR), at least 1,730 migrants have died in the Mediterranean Sea while attempting to reach Europe.

The future of the Aquarius rescue mission is uncertain after Panama said on Saturday it had begun procedures to remove the ship’s registration after Italy complained that the vessel’s captain failed to follow orders.

“We never did anything which was not authorized by Italian authorities,” Vallet told reporters during a news conference on Monday. He asked European countries to “find a solution, whatever it is. We can’t stop. We don’t want to stop. We will only yield to force and constraint.”

In June the Aquarius was forced to sail a further 700 nautical miles (1,296 kilometers) through the Mediterranean with more than 600 migrants on board to the Spanish port city of Valencia after it was denied a safe harbor by Italy and Malta.

Italy’s populist interior minister Matteo Salvini, who campaigned on an anti-immigrant platform, accuses the Aquarius of offering a “taxi service” to Europe for migrants in Libya.

Salvini has made good on an election promise by forbidding NGO ships carrying refugees to dock in Italy’s ports. Malta says it can’t handle large numbers of migrants.