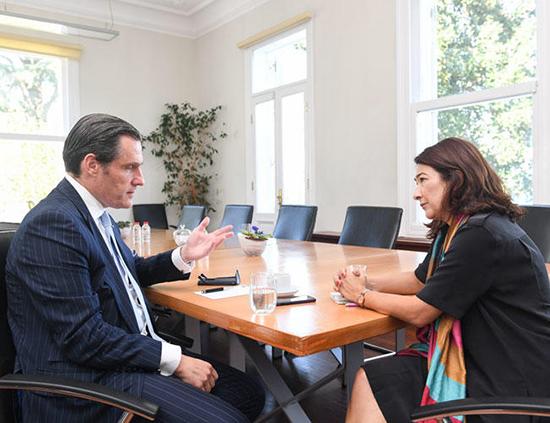 The business models in Turkey and Germany create many different types of cooperation opportunities, making Germany an ideal trade partner for Turkey, the chair of a prominent business organization has said.

“Given Turkey’s and Germany’s respective business models and economic positions, so many different types of cooperation opportunities could arise for German companies to develop business with Turkey. This would allow the Turkish economy to reach the next development level. Germany is the ideal partner,” Markus Slevogt, the president of the German-Turkish Chamber of Commerce and Industry, has told the Hürriyet Daily News.

To what do you attribute the improvement in relations?
The relationship’s foundation is good and it is a foundation that has already existed for minimum 200 years. The business and diplomatic relationships have always been very good. Germany is, with 37.5 billion euros, Turkey’s largest trade partner. It is a deep relationship despite the fact that it can happen from time to time that you might not always be of the same opinion and opinions can clash.

I see nowadays a pragmatic attitude on both sides: That talking about each other, which happened pretty much in 2017, makes no sense. It is much more pragmatic if you start talking with each other because you also understand the issues that one party has with respect to the other party.

How do you explain the statement of support that came from Germany during the first few days of the fast depreciation of the Turkish Lira?

One could understand it in a way that it makes no sense to try to destabilize an important economy with unnecessary tweets or sanctions. It is important to talk to find common ground and to trigger further economic reform processes in Turkey. There is an overall European interest that the Turkish economy is performing well and fulfils its role in the division of labor between Turkey and Europe.

Is there a lack of trust among German business? Has the list that appeared at one stage about German companies claimed to have links with some terror organizations left a mark?

When this list surfaced, it caused some serious irritation, but this was immediately corrected by the Turkish side. The July 15 [2016] coup attempt and what happened afterwards left a mark on German companies in Turkey, particularly with those companies that came after the 2001 crisis. Large German companies that have had a history in Turkey for 100-150 years have seen everything, the Ottoman Empire, two world wars and several coup d’états. Since the late 1950’s early 60s – no matter what – the annual GDP growth was on average 4.8 percent. If you have a very long perspective then you understand very well that Turkey always has a growth potential.

Large German companies have a long-term perspective and see it as a very strategic investment. Others companies, for instance family-owned companies that came after the 2001 crisis and saw the reform processes during the early 2000s and were simply amazed, but they are not used to the country’s current volatility. The coup attempt and the state of emergency were totally a new territory for them, not only scaring the local management but they were also something irritating for shareholders in Germany, irritating them to the degree that there was suddenly a halt and checking to understand what is going on. If they had some investment plans in the pipeline, they were at least put on hold in order to understand where the state of emergency is heading to. Now after everyone got a little bit more used to the overall constellation, I feel that there is still a little bit of hesitation left, but nevertheless, they find their ways and means to still consider Turkey as an important hub within their strategies and they are looking to some extent back into the plans they had put on hold.

The German media has criticized Turkey about the lack of rule of law. Didn’t this have a toll on the businesses’ stance?

Businesspeople never believe in third party references. They visit the place and try to find a good understanding; those who had certain hesitations were not basing their hesitations on media’s or others’ assessments. They went back to Turkey and they looked at how it is going and talked to their local management and understood what’s going on and based their decisions on first-hand observations. They try to stick to the facts.

How would you currently describe the perspective of the German business on Turkey?
Looking at the complementary between the two economies, one plus one you could reach even three or four. Turkey’s business model is still one of a technology absorbing economy. Most of the largest sectors are very much driven by foreign knowhow. But there is eagerness to enter a more technology-driven business model. Since 2008, we have been caught in a middle income trap. That happens to most emerging economies and this is exactly the moment to change gear.

Given Turkey’s and Germany’s respective business models and economic positions, so many different types of cooperation opportunities could arise for German companies to develop business with Turkey. This would allow the Turkish economy to reach the next development level. Germany is the ideal partner. For instance, German support in terms of vocational educational systems could enhance Turkey’s workforce’s future employability. We have so much space for future cooperation because the mentalities are relatively similar. Both societies are hard-working, striving for a better life. There is a very big degree of liking each other.

What prevents reaching this potential? The detention of some Turkish-German journalists might have left a mark.

This is an issue which lasts for a certain period of time in the memory and relationship between the two countries. However, what I am trying to refer to has nothing to do with politics, what I refer to has to do with potential, and to certain reforms that need to be done in Turkey, like in the area of education.

How is the current economic stress factor in German-Turkish economic relations?

It is understandable that to fight the effects of the economic developments, certain measures are being taken. But some of the measures are coming at such speed and then once a certain new regulation is put into the picture, we first of all have difficulties in understanding how the implementation is being intended. Second, there is not only one new regulation: Every couple days another regulation is coming in. We feel like bombarded by certain regulatory changes that are very much affecting the companies’ day-to-day activity. It first causes irritation and then you have to double check with three different governmental parties what it really means and how it will be enacted. And then you also realize the way it was intended in the first place might be different in terms of implementation. The need to apply measures is very understandable, but maybe it could be more in dialogue with businesses, investors and institutions like our chamber representing these investors’ interests. 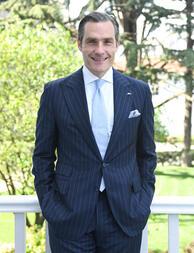 Who is Markus Slevogt?

Dr. Markus Slevogt is the president of the German-TurkishChamber of Commerce and Industry.

Slevogt came to Turkey in 1999 as the senior country representative of Deutsche Bank AG. In 2008, he moved to ING Group and was transferred to ING Bank A.Ş. Turkey in 2010 as managing director responsible for Wealth Management. He is currently a board member in different Turkish family holdings and subsidiaries of German investors. He is also vice president of Bahçeşehir University’s Graduate School of Business.

Slevogt holds a diploma in economics from the University of Kent in the United Kingdom and an MBA and PhD from Philipps-University Marburg in Germany.

The AHK Turkey is an official member of the chamber organizations of Germany (DIHK) and Turkey (TOBB).