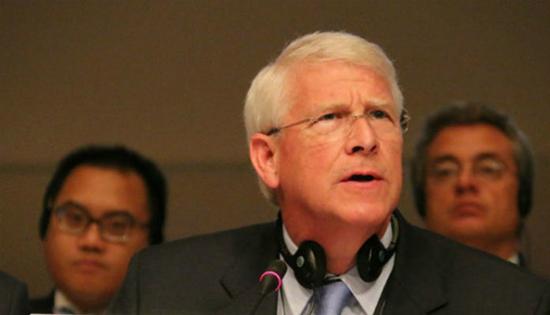 Helsinki Commission Chairman Sen. Roger Wicker, a Republican from Mississippi, has expressed his disappointment over a recent decision by a Turkish court to reduce a former NASA scientist’s prison sentence by two-and-a-half years instead of releasing him.

A dual citizen of the US and Turkey, former NASA scientist Serkan Gölge, 38, was detained in Turkey on July 23, 2016 as part of an investigation into the Gülen movement, which the Turkish government accuses of masterminding a coup attempt on July 15, 2016. He was arrested after being kept in police custody for 14 days. In February a Turkish court in Hatay province handed down a prison sentence of seven years, six months on charges of membership in a “terrorist” organization. Last week, Gölge’s sentence was reduced to five years, and he remains in prison despite the US demand that he be released immediately.

“The court’s response to Serkan Gölge’s appeal is deeply disappointing. Serkan and his family already have endured more than two years of anguish and separation, and yet the Turkish justice system has failed to produce any convincing evidence of the charges against him. This injustice must come to an end. US sanctions on Turkey’s justice and interior ministers should continue until all wrongfully detained Americans and locally employed staff of US consulates in Turkey are free,” Wicker said in a statement posted on the commission’s website on Monday.

The Helsinki Commission, which is also known as the Commission on Security and Cooperation in Europe, is an independent agency of the US federal government. For 40 years, the commission has monitored compliance with the Helsinki Accords and advanced comprehensive security through promotion of human rights, democracy and economic, environmental and military cooperation in the 57-nation OSCE region.

Gölge is one of several American citizens, including pastor Andrew Brunson, who have been caught up in the sweeping purge that followed the 2016 coup attempt in Turkey. Gölge, Brunson and two Turkish employees of US consulates were charged with terrorism offenses despite no involvement in violent activity — a situation faced by thousands of other Turks. A third consulate employee remains under house arrest on dubious charges.

In November 2017, the Helsinki Commission held a hearing on the detention of American citizens and US consulate employees in Turkey. A month earlier, Helsinki Commission leaders called on Turkish President Recep Tayyip Erdoğan to lift the state of emergency imposed in July 2016 after the failed military coup against his government. Turkey ended its two-year-long state of emergency in July 2018, but shortly thereafter the Turkish Parliament approved legislation that effectively enshrines many of President Erdoğan’s controversial emergency decrees.

Ahead of a May 2017 meeting between US President Donald Trump and Turkish President Erdoğan, Helsinki Commission leaders also urged President Trump to seek guarantees that US citizens and locally employed staff jailed in Turkey would have their cases promptly and fairly adjudicated.