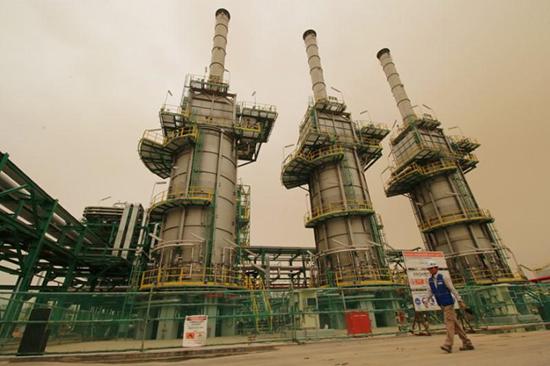 SINGAPORE (Reuters) – Oil prices on Tuesday were within reach of four-year highs hit in the previous session, as looming U.S. sanctions against Iran and unwillingness by the Organization of the Petroleum Exporting Countries (OPEC) to raise output supported the market.

The United States from Nov. 4 will target Iran’s oil exports with sanctions, and Washington is putting pressure on governments and companies around the world to fall in line and cut purchases from Tehran.

OPEC+ is the name given to the group of oil producers, including non-OPEC supplier Russia, that agreed to curtail output starting in 2017.

While Britain, China, France, Germany, Russia and Iran on Tuesday said they were determined to develop payment mechanisms to continue trading despite the sanctions by the United States, most analysts expect Washington’s actions to knock between 1 million and 1.5 million barrels per day (bpd) of crude oil supplies out of markets.

“We view Brent’s rally above $80 per barrel as fundamentally justified,” said Fitch Solutions in a note.

U.S. President Donald Trump has demanded that OPEC and Russia increase their supplies to make up for the expected fall in Iranian exports. Iran is the third-largest producer in OPEC.

OPEC and Russia, however, have so far rebuffed such calls.

“Any formal decision on oil output by the producer group, barring an extraordinary meeting, will only take place at the December meeting. Thus the window period for oil prices to potentially extend gains is quite wide as Iran loses exports and OPEC+ remains on standby,” Tchilinguirian said.

“We don’t believe OPEC can actually raise output significantly in the near term, as the physical spare capacity in the system is not that high,” Kelty said.

Bank of America Merrill Lynch has lifted its average Brent price forecast for 2019 from $75 per barrel to $80, while it increased its WTI crude oil forecast by $2 to $71 per barrel.

The bank said “the Iran factor may dominate the market near-term and cause a (crude price) spike,” although it added that emerging market “demand concerns could reappear thereafter.”

Indian refiners – struggling from high crude feedstock prices and a sliding rupee – are planning to reduce oil imports in what could be a first sign that high prices are starting to hurt demand.

Despite the bullish sentiment, some traders said current prices already reflected the tighter market, and that more oil would be coming in 2019.

Commodity trading giant Vitol said on Tuesday that non-OPEC producers, especially the United States, may insert up to 2 million bpd of new crude into the market in 2019.