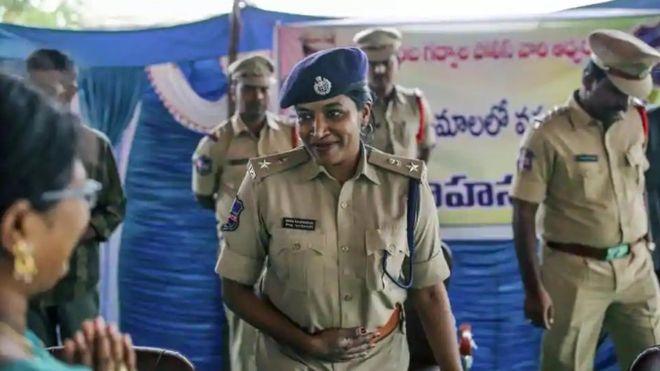 Something unusual happened when dusk fell in early summer in more than 400 villages in the southern Indian state of Telangana.

Men and women raced home from their farms earlier than usual, bolted the front doors, turned out the lights and stayed in. Children, used to playing outdoors until late, were the first ones to be herded home. The streets emptied, and an eerie calm swiftly descended upon the area.

This was far from normal behaviour: during the dry, searing summers, many villagers slept outside on rope-beds in breezy, open courtyards.

In March, village policemen – the state has more than 4,000 such policemen for grassroots policing and intelligence collection – first reported this unusual behaviour to their superior.

Back in the district town of Gadwal, the local chief of police, Rema Rajeshwari, listened to her puzzled constables.

“They said life in the villages had come to a virtual halt after sundown. They said they had never seen anything like this before,” Ms Rajeshwari told me.

For the next few days, policemen tried to find out what was happening.

What they discovered was startling. Most villagers had received a video and an audio recording on WhatsApp that had kept them on tenterhooks.

There was a grisly – and evidently doctored – video of a man being disembowelled. And there was an audio recording in the local Telugu language where a male voice said a gang of tribespeople, who were involved in highway robberies and burglaries decades ago, had returned, this time, to “steal” human organs.

When police began checking the villagers’ phones, they found between 30 and 35 videos and photos that had gone viral in the area. One video which was being widely shared was supposedly of a child being kidnapped. In reality, it was a cleverly edited version of a child safety film from Pakistan, designed to create awareness. It was also followed by an audio message.

“The child kidnappers are coming to our villages,” the message said. “They will throw stones at your door. Don’t step out and let your children out. Please circulate this and make it viral.”

The villages of Jogulamba Gadwal and Wanaparthy districts are part of a region that was once counted among the 20 most disadvantaged districts of India. Rice and cotton farms dot a largely arid landscape. Most people are landless, and migrate to cities in search of work.

Barely half of the people can read or write. But every home has at least one smartphone, usually a second-hand Chinese one, costing as little as 2,000 rupees ($27; £21). Cheap data means that people with little access to education have the fullest access to technology.

Media literacy is low. Villagers are glued to material circulating on WhatsApp for news, viral videos and social conversations. Every village has more than two dozen WhatsApp groups, carved along community, caste, kinship and social interest lines. They are among 200 million Indians who send more than 13 billion messages every day, making India the biggest market for WhatsApp.

It was March, and the videos were going viral in the two districts. Ms Rajeshwari decided to revitalise the village policing to combat fake news. A constable assigned to each village began going door-to-door showing people the fake videos and messages. They asked people not to believe in rumours, and warned them that sharing fake news was a punishable offence. Night patrolling was intensified. The phone numbers of the village constable and the police chief were distributed to villagers, and inscribed on walls.

For more than a month-and-a half, Ms Rajeshwari slept fitfully as rumours of child kidnappers and organ thieves spread like wildfire through WhatsApp and an Indian messaging service called ShareChat. More than 54,000 children were abducted across India in 2016-17, but when police checked the records, they found no recent history of kidnappings in these parts.

But the phones kept ringing. One night, a villager called, hysterically reporting that some people were throwing stones at his door, and that the child snatchers had arrived. The local constable reported back that there was no such incident and all was quiet.

Ms Rajeshwari decided to find out on her own. “What I found was some drunk villager was hallucinating about child snatchers after watching the video and calling the police up.”

In April, in a remote village, residents retired for the night after a religious function. Two women singers who had performed at the function had missed the last bus home and decided to spend the night in a local temple. Around midnight, a drunk man spotted them. He woke up his village, saying he had spotted “child kidnappers” sleeping in the temple.

A mob descended on the shrine in no time and dragged out the women. They were tied to a tree and beaten up. An alert villager phoned the village constable. Four policemen rushed to the area and rescued the women in the nick of time.

Around the same time, in another village, a shepherd had a quarrel with two teenage friends. The friends circulated his picture on WhatsApp with a message that he was a “child snatcher”.

The same day, while grazing his animals, he was chased down and attacked by people in a neighbouring village who had seen his picture on their phones. When the police picked up the teenagers, they said they had sent out the picture to settle scores. “We thought let’s make this viral,” they said,” and teach him a lesson.”

Thirteen such incidents were reported over April and May. Things turned so bad that panic-stricken villagers formed vigilante squads and patrolled the villages with sticks and stones.

Ms Rajeshwari says the village policemen worked continuously with elders and village council leaders to raise awareness about fake news. The constables added themselves to village Whatsapp groups to keep a watch on the material being shared. The village drummer – a modern-day town crier who performs at weddings, funerals and makes public pronouncements – was mobilised to go around and talk about rumours. Policemen formed cultural groups and travelled to villages, singing songs and performing skits that they had composed about the dangers of fake news.

Beginning a month later, in April, mobs went on to lynch at least 25 people across India after reading the same false rumours spread on WhatsApp. India’s government asked WhatsApp to act urgently to halt the spread of “irresponsible and explosive messages”.

Far away, in more than 400 villages of Telangana, where the same rumours had sparked tensions earlier in the summer, no lives were lost.

Facts were getting heard, and rumours were being buried.