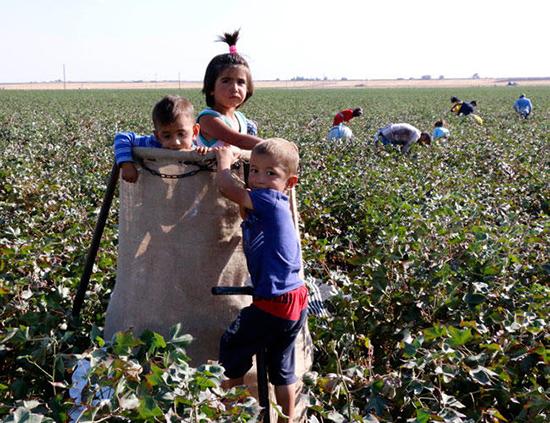 Thousands of children of farm laborers are working in the fields in the Siverek district of the southeastern province of Şanlıurfa picking cotton instead of going to school.

This year, cotton picking season coincided with the start of the new academic year. Thus, around 17,000 children will begin school a month later. There are a total of 81,576 school-aged children in the Siverek district.

“We have come here for the cotton harvest, which will take 30 days. I have two children going to school. My friends are in the same situation. Since we are working as farm laborers we have to come here with our children. Each of my children pick about 30 to 40 kilograms of cotton per day. They have to start school late because of cotton picking and fall behind in class,” Ali Alparslan said, adding that his family lives in a neighborhood 15 kilometers away from Siverek.

“We have to come here to make a living,” he said.

Zeynep Alparslan, a nine-year-old-girl said she would start school as soon as cotton picking is over.

“I fall behind. I miss my friends and my school. I am one of the best students in the class. I will have to work very hard to catch up after I am done with this farm work,” Zeynep said.

Some 18 million children and more than a million teachers in Turkey headed back to school on Sept. 17.

The second semester is scheduled to begin on Feb. 4 and end on June 14.

Last year, a total of 17.9 million students were enrolled in Turkey’s private and public schools while the number of teachers was a little over one million, up from 989,231 in the previous education year.