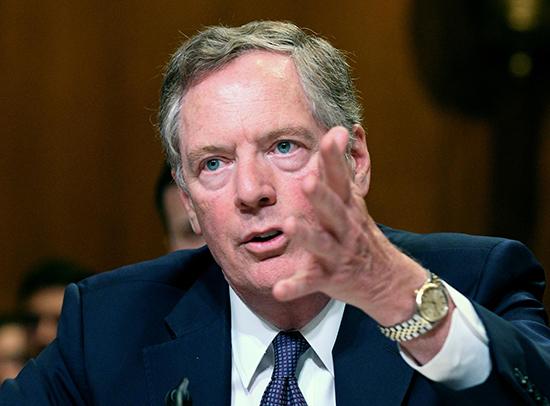 TOKYO (Reuters) – Japan and the United States will begin a second round of trade talks in New York on Tuesday, Japan’s top government spokesman said, amid concerns in Tokyo that Japan will face greater pressure to reduce its large trade surplus.

U.S. Trade Representative Robert Lighthizer and Economy Minister Toshimitsu Motegi had been scheduled to meet on Monday evening, ahead of a Wednesday summit between U.S. President Donald Trump and Japanese Prime Minister Shinzo Abe on the sidelines of a U.N. General Assembly meeting.

Due to a scheduling issue, the U.S. side asked to delay the meeting, which is now scheduled for 8:30 a.m. EDT (1230 GMT) on Tuesday, Chief Cabinet Secretary Yoshihide Suga told a news conference.

“We believe the talks will focus on further expanding trade and investment between Japan and the U.S. to bring benefits to both nations,” Suga said.

Lighthizer and Motegi met in August but failed to narrow differences on whether to open up negotiations for a bilateral free trade agreement.

Abe, after a Sunday dinner with Trump, told reporters the two had constructive talks on trade, which Motegi and Lighthizer would continue.

Japan is hoping to avert any import curbs and potentially steeper U.S. import tariffs on its cars, and fend off U.S. demands for a free trade agreement.

Japanese media have said Tokyo is considering an agreement that would lower tariffs on U.S. agriculture imports in exchange for avoiding higher tariffs on Japanese autos.