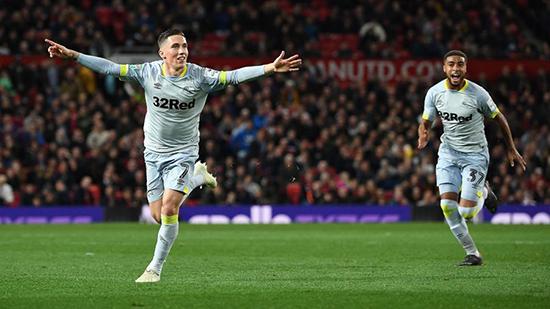 Jose Mourinho was given a bloody nose by his former midfielder Frank Lampard as Derby deservedly sent 10-man Manchester United crashing out of the Carabao Cup on penalties.

A night that started with fresh questions over Paul Pogba’s future ended with one of the best players that the Portuguese has ever worked with securing the finest win of his short managerial career.

Derby looked to have secured victory inside 90 minutes after substitute Jack Marriott followed up the exceptional Harry Wilson free-kick (below) that cancelled out Juan Mata’s early goal, only for Marouane Fellaini to direct home deep into stoppage time to snatch a 2-2 draw.

Jamie Allen’s late goal saw Burton reach the fourth round of the League Cup for the first time in their history as the League One side came from behind to defeat Burnley 2-1 at the Pirelli Stadium.

Kevin Long headed the Premier League strugglers in front just before half time but Liam Boyce equalised and then set up the winning goal for Allen, when Burnley were piling on the pressure.

Jake Hesketh should have made the winning margin more comfortable but saw his close-range shot strike the post in injury time.

Phil Foden scored his first senior goal as Manchester City eased into the fourth round with a 3-0 victory at Oxford United.

Gabriel Jesus sent the defending champions on their way to victory, nodding home from close range in the 36th minute, before Riyad Mahrez (78) doubled Pep Guardiola’s side’s advantage with a superb counter-attacking goal. Foden, who played a brilliant pass in the build-up to Mahrez’s strike, rounded off proceedings in stoppage time.

Substitute Callum Wilson headed a dramatic injury-time winner as Bournemouth scraped into the fourth round of the Carabao Cup with a 3-2 win over Sky Bet Championship side Blackburn.

With the tie heading for a penalty shoot-out, the striker rose highest at a corner to spare the Cherries’ blushes after they squandered a two-goal lead.

They had appeared on course for a straightforward passage to the last 16 of the competition after goals either side of half-time from Junior Stanislas and Jordon Ibe put them in control.

But Rovers captain Craig Conway smashed home from distance to halve the deficit, before Adam Armstrong levelled from the spot with 18 minutes remaining to make them sweat.

The visitors also had defender Derrick Williams sent off late on for a deliberate handball, moments before Wilson’s late intervention.

Danny Ward’s three penalty shoot-out saves sent Leicester into the fourth round of the Carabao Cup after a goalless draw at Wolves.

An increasingly end-to-end game somehow ended goalless and it was in the shoot-out when Leicester again took the initiative, with Ward making three strong saves before Kalechi Iheanacho slotted in the winning spot-kick to give them a 3-1 penalty win.

The former England international opened his account for the season in stunning style from 30 yards in the sixth minute and a dominant Palace side doubled their lead through Patrick van Aanholt after 76 minutes before the impressive Townsend grabbed his second nine minutes from time.

Joe Bryan, Luca de la Torre and Cyrus Christie scored their first goals for Fulham who gave a debut to a 15-year-old in their 3-1 Carabao Cup victory at Millwall.

Millwall were given encouragement when in the 61st minute Tom Elliot headed in, but they were to be knocked out and Fulham academy star Harvey Elliott was brought on for the final 10 minutes.

Middlesbrough reached the fourth round as penalty misses from Preston duo Callum Robinson and Graham Burke meant the visitors secured a 4-3 shoot-out win after a 2-2 draw at Deepdale.

Boro were successful with all of their penalties, having come from behind twice in normal time with goals from Ashley Fletcher and Marcus Tavernier cancelling out efforts from Robinson and Tom Barkhuizen.

Elsewhere, Jordan Rhodes scored his first hat-trick in four years as Norwich edged out League One Wycombe 4-3 in an enthralling third-round encounter at Adams Park.

And League One Blackpool delivered a Carabao Cup upset at Bloomfield Road with a 2-0 win over Championship side QPR.

Frenchman Armand Gnanduillet delivered the opening goal after 28 minutes and QPR’s Jordan Cousins was sent off for a second yellow midway through the second half, before captain Jay Spearing put the final nail in QPR’s coffin with a rocket of a strike in the last minute.