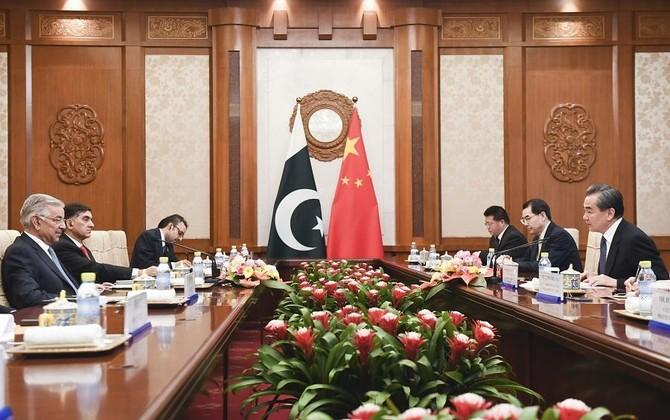 BEIJING: Any plots to sow discord in China’s ties with Pakistan will not prevail, the Chinese government’s top diplomat said on Tuesday, as Beijing fends off criticism of its economic projects in Pakistan and a clampdown in China’s western Xinjiang region.
China has pledged $57 billion to build power stations, major highways, new railways and high capacity ports along the China-Pakistan Economic Corridor, a key part of Chinese President Xi Jinping’s Belt and Road plan to further tie China to Eurasia.
The sustainability of Chinese projects has come under fresh scrutiny in recent months, as US Secretary of State Mike Pompeo in July warned that any potential International Monetary Fund bailout for Pakistan’s troubled economy should not be used to pay off Chinese lenders. Both Beijing and Islamabad say the loans are sustainable.
China welcomes the good start made in its “all-weather” partnership with Pakistan following the election of the new government under Prime Minister Imran Khan, State Councillor Wang Yi told Pakistan Foreign Minister Shah Mehmood Qureshi on the sidelines of the UN General Assembly in New York.
But “any conspiracies attempting to incite disharmony or interfere in China-Pakistan relations will not prevail,” Wang added, without elaborating, according to a statement released by China’s foreign ministry on Wednesday.
China and Pakistan should continue to make “all-out” efforts to promote the economic corridor, expand trade and reduce poverty to bring more benefits to the ordinary people of Pakistan, Wang said.
The relationship between China and Pakistan will not change, regardless of circumstantial changes, Qureshi told Wang, according to China’s statement.
The corridor is “extremely important” to Pakistan and has brought “deep impact” for jobs, development and livelihood, and Islamabad will take effective measures to ensure the security of the entire route, he added.
Beijing has faced growing international criticism from rights groups, some western nations and United Nations human rights experts over its sweeping security crackdown in the far western region of Xinjiang, which borders Pakistan.
Islamabad, like most governments of majority Muslim countries, has so far remained silent on the issue, but a group of Pakistani businessmen whose Chinese wives and children have been trapped in Xinjiang are lobbying the new government to help pressure Beijing into allowing their release.
Beijing says it faces a serious threat from extremist militants and separatists in Xinjiang and has rejected accusations of mistreatment.