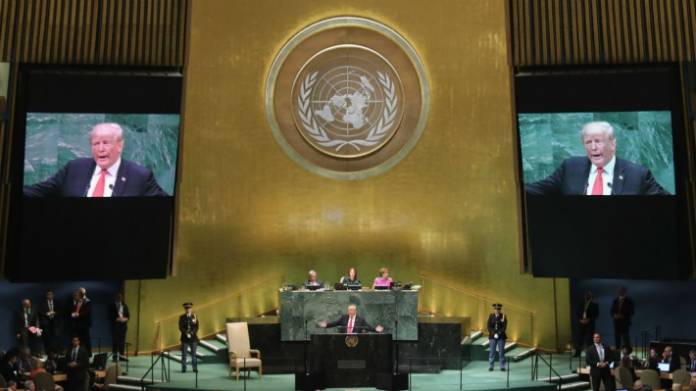 Donald Trump has used his second address to the UN to denounce the “ideology of globalism” and multinational organisations, stressing the US will always choose independence over global governance.

Arriving late at the UN headquarters in New York, the US president took to the podium to deliver a wide-ranging speech that touched on migration, aid and sovereignty.

He defended his “America First” agenda, NPR says, “in effect spiking the football at what his secretary of state described as the ‘Super Bowl of diplomacy’.”

Despite withdrawing from the Iran nuclear deal, the Paris climate accord and Asia-Pacific trade pact, he insisted his focus on American “sovereignty” has paid off, helping to foster both peace and prosperity.

In a common theme that ran through his speech, the president said the US “will not be taken advantage of any longer,” particularly on trade and defence spending.

Trump defended his aggressive use of tariffs, against not only China but also close allies like Canada and the European Union, saying: “We believe that trade must be fair and reciprocal. We will not allow our workers to be victimised, our companies to be cheated, and our wealth to be plundered and transferred.”

He issued a not-so-veiled threat for wayward allies to fall in line, saying it was unfair the US got so little back despite its position as the world’s biggest contributor to international aid.

Announcing a review of foreign aid contributions, he said: “We are only going to give foreign aid to those who respect us, who frankly are our friends.”

Signalling Iran has now usurped North Korea as America’s global enemy number one, he used the speech to accuse its leaders of sowing “chaos, death and destruction”, and called on reluctant partners to abide by the crippling sanctions his administration has reimposed since withdrawing from the nuclear deal earlier this year.

The US president had earlier ruled out a face-to-face meeting with Iranian leader Hassan Rouhani at the gathering of world leaders “despite requests” to do so.

The Guardian described Trump’s tone as “measured”, but said his comments “still mark a dramatic departure from the US’s traditional role at the United Nations”.

CNN’s Jeremy Diamond said the speech showed “that while Trump has accelerated the execution of world-rattling policies, his worldview remains consistent with the “America First” doctrine he first took to the world stage last year: proclaiming the world is best served if countries focus on their own self-interests and reject global governance mechanisms”.

Last year’s assault by the president on the United Nations and its multilateralism, the effort to bring groups of countries together to pursue a common goal, “was vastly amplified this year… partly by Mr Trump’s complete condemnation of globalism in general and of the International Criminal Court in particular, but also by his even stronger championing of individual national sovereignty, love of country and patriotism”, BBC diplomatic correspondent James Robbins said.

“After today’s speeches the canyon which divides multilateralism’s detractors and its defenders is more starkly visible, more blindingly lit, than ever before.”