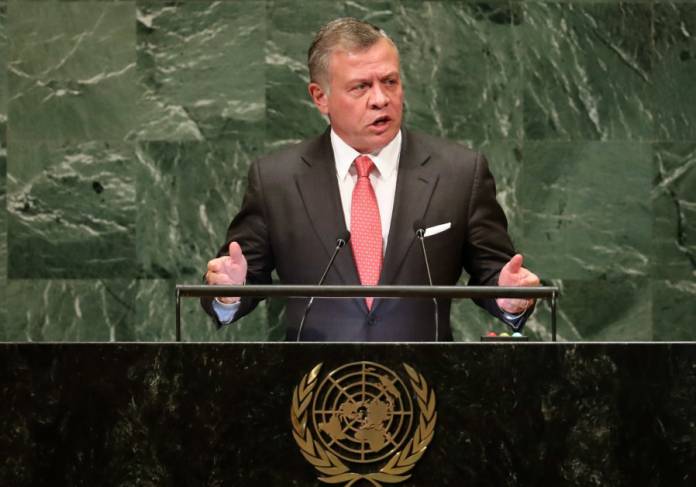 Abdullah said that the best way forward was a two-state solution on the 1967 borders with east Jerusalem as its capital and a secure Israel.

He made an impassioned plea for a two-state resolution to the Israeli-Palestinian conflict based on the 2002 Arab League initiative and warned against a one-state solution to the conflict.

“We need to safeguard the heritage and peace of Jerusalem, a holy city to billions of people around the world. The Hashemite custodianship of Islamic and Christian holy sites in Jerusalem is a duty that Jordan is proud to carry.

“We will counter any attempts to change the holy city’s historic Arab, Christian and Muslim identity. But Jerusalem’s future is not Jordan’s concern alone. It is yours. There are global implications when religious worship is threatened and international law is undermined,” Abdullah said.

He spoke hours after US President Donald Trump at the UN touted his decision to relocate his country’s embassy from Tel Aviv to Jerusalem. His 12-minute address in English was delivered in advance of an anticipated roll out later this year of an American-led peace plan to resolve the Israeli Palestinian conflict.

Abdullah said that the best way forward was a two-state solution based on the 1967 borders with east Jerusalem as the Palestinian capital and a secure Israel.

“Arab and Muslim countries are committed to a comprehensive peace,” Abdullah said. He noted that the 2002 Arab peace initiative that offered Israel normalized ties with the Arab world in exchange for a withdrawal to the 1967 lines had been on the table for more than 16 years.

“The US administration has long been committed to peace and has a leading role in our progress going forward. Yes, we have a long way to go. But we cannot give up because the task is hard – because what is the alternative?” Abdullah asked.

“Can we afford to let one of the world’s most strategic regions be tied to an endless cycle of violence in its mist?”

He warned against unilateral actions and the “ugly undemocratic” one-state resolution, which he said was an abandonment of peace and a way to abandon the work of reconciliation.

Palestinian Authority President Mahmoud Abbas was scheduled to gather representatives from 40 nations on Wednesday to reaffirm their commitment to a multi-lateral peace process for the creation of a two-state solution to the Israeli-Palestinian conflict.

The Palestinian Authority has been blunt in its opposition to efforts by the US President to broker a peace deal to end the Israeli-Palestinian conflict.

Abbas is expected to address the UN General Assembly on Thursday, just before Prime Minister Benjamin Netanyahu is scheduled to speak.