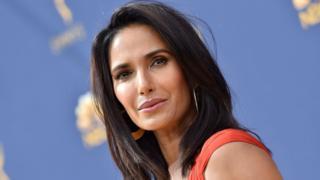 US television host Padma Lakshmi has explained why she kept silent after allegedly being raped as a teenager.

In a piece for the New York Times, Ms Lakshmi, 48, says she was raped by a man over 30 years ago.

But she said she began to feel the alleged attack was her fault, and that she understands why women might not disclose sexual assaults.

Her article was prompted by allegations surrounding Donald Trump’s choice for the Supreme Court.

The US president has cast doubt on two women who have accused Judge Brett Kavanaugh of sexual misconduct.

I have no doubt that, if the attack on Dr. Ford was as bad as she says, charges would have been immediately filed with local Law Enforcement Authorities by either her or her loving parents. I ask that she bring those filings forward so that we can learn date, time, and place!

The allegations against Judge Kavanaugh, which he has repeatedly denied, date back to the 1980s.

Christine Blasey Ford, his first accuser, is due to testify before a US Senate panel this week.

Ms Lakshmi wrote: “President Trump tweeted that if what Dr Ford said was true, she would have filed a police report years ago.”

“But I understand why both women would keep this information to themselves for so many years without involving the police. For years, I did the same thing.”

What happened to Ms Lakshmi?

The Top Chef host says she dated the man while still a teen.

In her account, she said they went to his apartment where she fell asleep, and woke up with him on top of her.

He later drove her home, and Ms Lakshmi said she was in shock.

“I didn’t report it. Not to my mother, not to my friends and certainly not to the police.”

She explains how she started to feel it was her fault: “We had no language in the 1980s for date rape. I imagined that adults would say: ‘What the hell were you doing in his apartment?'”

Thirty-two years on, the TV personality says: “I have nothing to gain by talking about this.”

But she says, alluding to Mr Trump’s implication that allegations not made immediately are less true or less severe: “We all have a lot to lose if we put a time limit on telling the truth about sexual assault.”

“Some say a man shouldn’t pay a price for an act he committed as a teenager. But the woman pays the price for the rest of her life, and so do the people who love her.”https://t.co/tFbxpVzcmt

.@PadmaLakshmi it is strange, right? That we haven’t thought about that moment for so long and now in a matter of a week names are being said, photos are being seen, questions are being asked, pain is coming up, but most of all, power. Communication. Family. Love. Thank you sis.