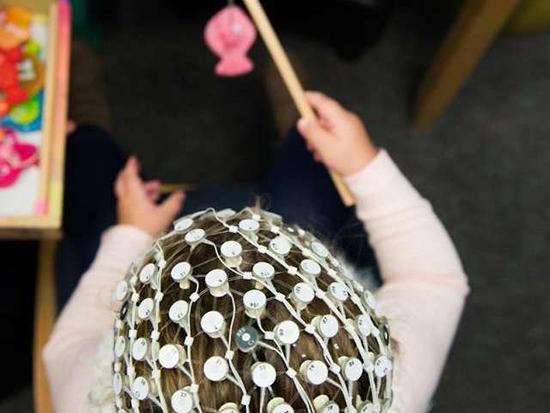 Imagine a situation where one child is teasing another. While the child doing the teasing means it playfully, the other child views it as hostile and responds aggressively.

Behavior like this happens all the time with children, but why some react neutrally and others act aggressively is a mystery.

In a new study, a University of Iowa-led research team reports it has identified a brain marker associated with aggression in toddlers. In experiments measuring a type of brain wave in 2½ to 3½-year-old children, toddlers who had smaller spikes in the P3 brain wave when confronted with a situational change were more aggressive than children registering larger P3 brain-wave peaks, research showed.

“There are all kinds of ambiguous social cues in our environment,” says Isaac Petersen, assistant professor in the Department of Psychological and Brain Sciences at the UI and corresponding author on the study. “And, when children aren’t able to detect a change in social cues, they may be more likely to misinterpret that social cue as hostile rather than playful.

“Children respond to the same social cues in different ways, and we think it’s due to differences in how they interpret that cue, be it neutral or hostile,” Petersen says.

The P3 wave is part of a series of brain waves generated when an individual evaluates and responds to a change in the environment—such as changed cues in a social interaction. Previous research, primarily in adults, has shown individuals with shorter P3-wave peaks when confronted with a change in the environment tend to be more aggressive. As such, scientists believe P3 is a key indicator of aggression, as well as associated with depression and schizophrenia.

To tease out those differences in children, the researchers recruited 153 toddlers and, in individual sessions, outfitted each with a net of head sensors that measured brain-wave activity while a steady stream of tones sounded in the room. As the children watched silent cartoons on a television screen, the pitch of the tones changed, and the researchers measured the P3 brain wave accompanying each change in pitch.

Toddlers with a shorter peak in the P3 brain wave accompanying the tone change were rated by their parents as more aggressive than children with more pronounced P3 spikes.

The difference in P3 peaks in aggressive and non-aggressive children “was statistically significant,” Petersen says, and the effect was the same for boys and girls.

“Their brains are less successful at detecting changes in the environment,” Petersen says of the children with shorter P3 brain-wave peaks. “And, because they’re less able to detect change in the environment, they may be more likely to misinterpret ambiguous social information as hostile, leading them to react aggressively. This is our hypothesis, but it’s important to note there are other possibilities that may explain aggression that future research should examine.”

The researchers tested the same children at 30, 36, and 42 months of age to further explore the association with the P3 brain wave and aggression.

“This brain marker has not been widely studied in children and never studied in early childhood in relation to aggression,” says Petersen, who has an appointment in the Iowa Neuroscience Institute. “It might be one of a host of tools that can be used in the future to detect aggression risk that might not show up on a behavioral screening.”

The research is important because early interventions are more effective for stemming aggression, says Petersen, who is a clinical psychologist.

“Evidence suggests that early interventions and preventive approaches are more effective for reducing aggression than interventions that target aggression later in childhood or in adolescence when the behavior is more ingrained and stable,” he says.

The paper was published Sept. 26 in the Journal of Child Psychology and Psychiatry. It is titled “A longitudinal, within-person investigation of the association between the P3 ERP component and externalizing behavior problems in young children.”