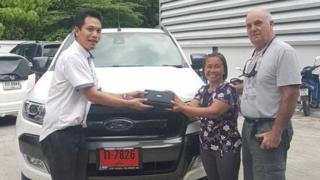 The bodies of a UK millionaire and his Thai wife have been found in northern Thailand nearly a week after what police suspect was a contract killing.

The bodies of Alan Hogg, 64, and Nod Suddaen, 64, were discovered buried on their property in Phrae province.

Police say Mr Hogg, who was from Edinburgh, was shot dead, while his wife was killed with a hammer.

Three suspects have been held. They are alleged to have been hired to carry out the attack by Nod Suddaen’s brother.

He has now been arrested.

The three alleged killers were arrested after police tracked down a pick-up truck said to have been taken from Mr Hogg’s property.

The British embassy in Thailand has so far made no public comment on the issue.

Mr Hogg moved to Thailand several years ago and had built a luxury villa in Phrae which included a swimming pool and a summer house, reports say.