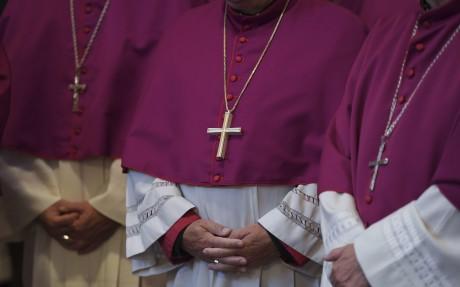 Germany’s Catholic Church has apologised to thousands of victims of sexual assault by clergy, with the institution’s top cardinal saying perpetrators must be brought to justice.

Cardinal Reinhard Marx said he was ashamed over the decades of abuse that have shattered trust, as well as how so many looked away for so long.

The dismay expressed by the head of the German Bishops’ Conference came as the institution published a damning report showing that in Germany, almost 3,700 minors – mainly boys – were assaulted between 1946 and 2014.

The report’s authors said the figure was “the tip of the iceberg”.

“Sexual abuse is a persistent problem and not a historical problem” in the Catholic Church, said Harald Dressing, a professor at the Mannheim Institute of Psychology, who coordinated the research commissioned by the Bishops’ Conference.

Pope Francis, on his way back from a visit to the Baltic states, said Tuesday “if just one priest abuses a child, it’s monstrous.”

But the way the Church views sex abuse has evolved, as it has in general society, the pontiff added.

“In past times, things were hidden. They were also hidden at home, when uncles raped a niece, when the father raped his children. These things were hidden, because it was a great shame,” he said on board the papal plane.

“That was the way of thinking in past centuries, or in the last century,” the pope said, adding that the past should not be judged with today’s eyes.

“I have to say very clearly that sexual abuse is a crime,” said Cardinal Marx.

“Those who are guilty must be punished.”

“For all the failures and for all the pain, as chairman of Germany’s Bishops Conference, I apologise. I also apologise personally.

“We are not done with confronting the incidents and consequences, it begins now,” he stressed at a press conference.

Victims have criticised the report for falling short of what is needed to flush out perpetrators.

They urged the Church to bring in independent experts for a thorough audit, and called for victim compensation.

“The system of abuse, transfers (of offending priests) and cover-ups cannot be mapped out” by a study that had access only to available personnel documents, said victims’ association Eckiger Tisch.

“There are no names given of the responsible bishops who have perfected the system of covering up sexual attacks over decades.”

Justice Minister Katarina Barley also urged the Church to work with state prosecutors to bring every known case to justice.

Cardinal Marx acknowledged that a thorough reckoning of the problem was “absolutely necessary” but underlined that the process was colossal and would require time.

According to the study, 1,670 clergymen in Germany committed some form of sexual attack against 3,677 minors, mostly boys, between 1946 and 2014, intimidating their victims into keeping quiet.

More than half of the victims were 13 years old or younger, the study concluded, after examining 38,000 documents from the 27 German dioceses.

The survey’s researchers warned that the true scale of the abuse was far greater, as many documents had been “destroyed or manipulated”.

Predator priests were often transferred to another parish, which was not warned about their criminal history.

Only about one in three were subject to disciplinary hearings by the Church, and most got away with minimal punishment. Only 38 per cent were prosecuted by civil courts.

The research is the latest in a series of reports on sexual crimes and cover-ups spanning decades that has shaken the Catholic Church.

Pope Francis has himself been accused of ignoring abuse allegations against prominent US cardinal Theodore McCarrick for five years. The pontiff has so far refused to respond to the claims.

The pope also declined to answer a question about the latest report in Germany.

He has previously announced a Vatican meeting of national Church leaders on the protection of minors, for February 2019.

Joerg Schuh of the Berlin-based Tauwetter centre for victims of sexual abuse said that “the Catholic Church has a global problem” and called on the pope to make it “his number one topic”.

Major abuse cases in Germany have included a Berlin elite Jesuit school and the world-famous Catholic choir school the Regensburger Domspatzen where more than 500 boys suffered sexual or physical abuse.