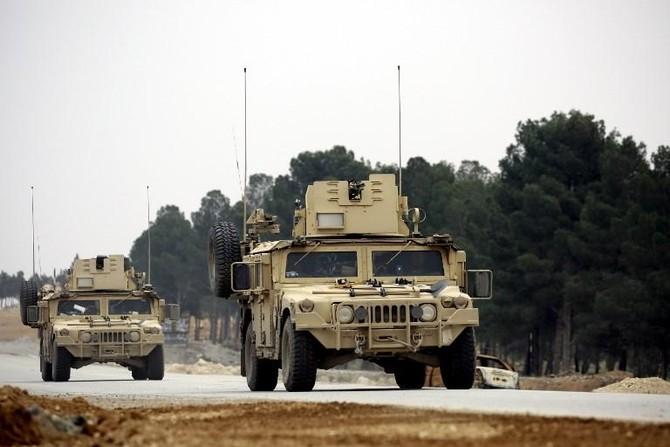 WASHINGTON: Six months after President Donald Trump said he wants US troops out of Syria, his top officials are hammering home what has become increasingly obvious: the US isn’t going anywhere.
Trump administration members say there can be no troop pull-out until the Daesh is permanently defeated — a subjective metric for a stubborn insurgency where the militants have shown tenacity in clinging to their last pockets of terrain.
The US military has been involved in Syria since late 2014 and now has more than 2,000 troops in the country, mainly working to train and advise local Kurdish and Syrian Arab fighters.
With broad gains on the battlefield and the defeat of Daesh` looking inevitable, Trump in March said he wanted US troops out of Syria “very soon,” later adding the mission would come to a “rapid end.”
But Defense Secretary Jim Mattis warned that quitting Syria too fast would be a “strategic blunder” and James Jeffrey, the US special representative for Syria engagement, this month said the US was “not in a hurry” to leave the war-torn nation.
“Getting rid of the ‘caliphate’ doesn’t mean you then blindly say okay, we got rid of it, march out, and then wonder why the ‘caliphate’ comes back,” Mattis told Pentagon reporters this week.
“This is not a conventional war where you raise a flag over the enemy’s capital and they sign a peace treaty. It’s not that kind of an enemy.”
Then on Monday, Trump’s national security adviser John Bolton, a long-time Iran hawk, pushed the idea of a US withdrawal even further off, tying such an event to Iran’s actions in Syria.
“We’re not going to leave (Syria) as long as Iranian troops are outside Iranian borders,” he told reporters.
“That includes Iranian proxies and militias,” he added.
With war still raging in Afghanistan 17 years since the US-led invasion, and thousands of US troops stationed in Iraq after the US invaded in 2003, the prospect of a yet another open-ended engagement worries some.
“US policy is now to stay in Syria as long as Iran stays, and Iran doesn’t seem to be in a hurry to leave, and there is the chance for escalation, or accidents, involving Russian forces,” Andrew Parasiliti of the RAND Corporation said.
On September 17, Syrian air defenses accidentally shot down a Russian military plane over the Mediterranean, killing all 15 crew members, as Israel was carrying out a raid on a Syrian army facility.
Moscow has blamed Israel for the incident, saying its pilots used the Russian plane as “cover” while conducting the air strike.
France on Monday warned that the Middle East risks endless war unless a peace agreement can be reached in Syria.
Syrian President Bashar Assad and “those who support him have a responsibility to work for a political solution,” French Foreign Minister Jean-Yves Le Drian told reporters at the United Nations.
“If not, we risk heading toward a sort of perpetual war in the area,” he said.