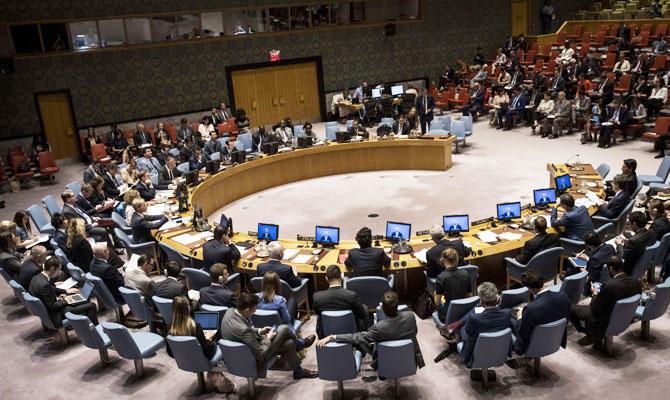 UN, September 26. /TASS/. The high-level week of the UN General Assembly, which began on Tuesday, will continue with two major events on Wednesday – the UN Security Council session under the chairmanship of US President Donald Trump on non-proliferation of weapons of mass destruction (WMD), and an international conference on Syria, organized by the European Union.

On Tuesday, first speeches were delivered in the UN headquarters, including by Trump, who threatened Iran with new sanctions, and Syria – with possible retaliation for the alleged use of chemical weapons.

Measures to counter Washington’s sanctions against the Iranian economy were in the focus of a ministerial meeting of states parties to the Joint Comprehensive Plan of Action (JCPOA) on Iran’s nuclear program. The sides announced their intention to set up a special mechanisms for transactions with Tehran. According to Director of the Russian Foreign Ministry’s Department for Arms Non-Proliferation and Control Vladimir Yermakov, Washington will continue to put pressure on its European partners and will try to destroy the mechanism of transactions with Iran which is now being created.

It was initially planned that Wednesday’s UN Security Council session will be devoted only to Iran and its alleged violations of the international law. However, the agenda of the meeting was later expanded to include measures to counter the proliferation of weapons of mass destruction. In an interview ahead of a high-level week of the 73rd UN General Assembly, Russia’s UN envoy Vasily Nebenzya said: “it is evident that a general topic of this kind makes it possible to discuss the broadest possible range of matters,” including the Salisbury incident. According to the Russian diplomat, the issue of North Korean denuclearization can also be raised at the meeting.

Editor-in-Chief of Russia in Global Affairs magazine and Research Director at the Valdai Discussion Club Fyodor Lukyanov said Trump’s presidency in the UN Security Council “creates a problem, because the chairperson of the meeting combines two functions – he represents his country and moderates a session of a collective international institution.”

“The UN administrative bodies face a serious challenge of mitigating the effect of a situation, in which Trump will speak as a national leader, without taking care that his words may formally be interpreted as the UN Security Council’s stance,” he told TASS, adding that the US leader “would try to make the maximum use of the UN rostrum to declare matters important for his political line.”

As of Tuesday morning, the meeting was expected to be attended by representatives of the council’s five permanent members and ten non-permanent as no requests to take part were received from Iran or other nations, a diplomatic source told TASS. UN regulations permit a country affected by the Security Council discussion to take part in it by sending a relevant request to the chairperson. The US assumed the council’s rotating presidency in September.

UN Secretary General Antonio Guterres will also attend the meeting as an observer. He will not make any reports.

It is yet unclear whether the Russian delegation, led by Foreign Minister Sergei Lavrov, will attend the international meeting on Syria to be held on the sidelines of the General Assembly on Wednesday. The meeting comes in continuation of the international donor conference held in Brussels on April 24-24.

Organizers of the meeting said they were interested in Russia’s presence. However, Moscow opposes the agenda and tone of the meeting, previously declared by Brussels. Earlier, the European Union said it would assist Syria’s post-conflict recovery only if an inclusive political transition takes place.

“As for the EU event, as far as we know, it will be a follow-up to the Brussels conferences on Syria, and their key message was the reluctance to provide assistance to reconstruct Syria until political reforms are carried out there,” Nebenzya said in an interview ahead of a high-level week of the 73rd UN General Assembly.

“If we take part in this meeting, we won’t blow their trumpet, but will make another attempt to persuade our colleagues to give up their evil practice,” the diplomat said.

The EU conference on “Supporting the Future of Syria and the region” was held twice. Last time, it took place on April 24-25 in Brussels and was attended by representatives of more than 85 countries and organizations. The goal of the conference was to collect funds to provide assistance to the Syrian population and refugees and also discuss the developments in Syria and political efforts on settling the crisis there. Some $4.4 bln was allocated to the delegation after the event. No representatives of Damascus were invited to the forum.