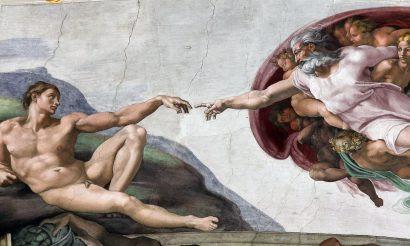 As a general introduction to the Hebrew Bible, Scott Shay’s book ‘In Good Faith’ sets a new standard

Scott Shay’s ably written book fills an important gap in the literature on religion available to a nonspecialist audience. It will be an important resource for many Asians who are struggling with the Western monotheistic religions. One would hope to see it soon in Asian-language editions.

Today, materialism is ubiquitous. But no one can blame Asians for following the trend. The death of perhaps 30 million Chinese during the Great Leap Forward of the 1950s is a living memory. Today’s is the first generation of Chinese that does not live in the shadow of hunger. Up to one-third of Indian children suffer to some degree from malnutrition.

Asia’s enormous economic advances of the past 30 years have lifted most of its people out of dire poverty, and that has taken up their undivided attention.

At some point, though, many of the Asians who today think mainly about material advancement will look for a greater purpose in life. The celebrated Asian virtues of family, education and work discipline have proven the robustness of Asian culture beyond doubt.

But there appears to be something missing in Asian life: a sense of a greater purpose, perhaps. And that is bound up with a yearning for justice, for the dignity of every individual.

Asia often elevates leaders who appear larger than life and more than human. If there is a lacuna in Asian culture, it is in hesitation to place limits on the egoism of people of power. Man does not live by bread alone, a man named Moses told the tribes of Israel 3,500 years ago, as they camped by the River Jordan and prepared to enter what is now Israel.

Moses’ message, refracted through many versions of Christianity and Islam, resonates improbably but powerfully among Asians. Perhaps a quarter of a billion Asians, from Central Asia to the Far East, have become Christians during the past generation, including about 110 million Chinese and 60 million Indians, although estimates vary.

That all of humankind stand equal before a single God who is the God of all peoples, and who promulgates a law that applies equally to native and stranger, is the most powerful idea in human history. Growing numbers of Asians embrace it. There are now more Christians in Asia than in the United States, and more believing Christians than in Western Europe.

Christianity is tolerated in China, home to perhaps half of Asian Christians, so long as it keeps a low profile, and it is impossible to obtain hard data. Evangelical, or Bible-centered Christianity, includes the overwhelming majority of Chinese Christians; less than one-tenth, or about eight million, are Catholics.

Christians read Moses’ Bible along with the New Testament added by the followers of Jesus of Nazareth. It is hard to absorb the ancient text without guidance.

Scott Shay’s new book appears at a serendipitous moment. Shay is a believer, but he does not ask readers to abandon modern skepticism or scientific tools of inquiry.

His object is not to prove the existence of the biblical God, but on the contrary, to show that belief as well as disbelief both rest on unprovable assumptions. Atheism, he concludes, is a “faith” as much as are the monotheistic religions.

In Good Faith presents the Bible in its ancient context and in its encounter with modern science and philosophy without exhortation or sectarian bias. It reviews dispassionately the objections of various species of atheists, and concludes that belief in God as well as atheism both rest on unprovable assumptions.

Shay draws a bright line between monotheism and what he calls idolatry, that is, the elevation of what is not God to the status of God – including the worship of powerful men and women. And it exposes the reader adroitly to the biblical idea that nothing deserves worship except the one God of all mankind.

Shay is not a clergyman seeking converts, but a distinguished financier and philanthropist who has made his own spiritual journey over the years and wants to share what he has learned with others who balance the attraction of faith with modern skepticism.

He is an observant Jew, but his book incorporates Christian voices from the Catholic, Orthodox and Protestant currents of Christianity as well as Muslims. When he cites Jewish sources, it is to shed light on the radical difference between monotheism and idolatry that resonates through Christian and Islamic belief.

His most striking conclusion is that it is less important to believe in God than it is to reject idolatry – the elevation of things that are less than God to divine status.

Shay was prompted to write by the sudden popularity of the “New Atheists,” writers like Professor Richard Dawkins or Sam Harris, who lambasted religion for fanaticism and superstition.

“The atheists’ criticisms of religion all ring true as criticisms of idolatry, but not of Abrahamic monotheism, which they misrepresent,” Shay argues.

Shay has little to say about such religious themes as the afterlife, except to deplore the pagan practice of murdering slaves in the hope of keeping them as servants in the next world. What moves him about monotheism is the demands that it places upon society and individual to do justice and accord dignity to the humble in this life.

That theme has enormous potential resonance in caste societies. Anecdotal evidence tells us that low-caste Indians who enter the modern labor force turn to Christianity or Islam as a way of repudiating the inherited limitations of their social status.

Why is the idea of one God so important? Shay begins:

The Bible displays undisguised contempt for the gods and idols of other nations. This attitude leaves true believers with the unenviable task of having to reconcile God’s overt hatred of competing deities with His more loving attributes of benevolence, compassion and mercy. Richard Dawkins and like-minded critics have no such problem. Of course, they have resolved from the get-go that “God is the ultimate jealous narcissistic maniac,” an unjust bully obsessed with personal power and glory just waiting to take down anyone who bends a knee to another divinity.

But this exclusivity has the great virtue of excluding the worship of things that aren’t God, Shay argues.

Idolatry has always been, and today continues to be, the most divisive and dangerous ideology in the world. It promotes lies about power and relationships in society. It deifies – that is, falsely attributes superior and inexplicable powers to – finite natural processes, animals and people. It also bestows the authority – that is, falsely attributes the right – to these finite beings to use those powers as they choose, simply because they have them.

Japan’s Emperor Cult and its role in the Second World War come to mind, or the cult of personality around Stalin or Mao Zedong. The tragic cycle of imperial overreach and decline that characterizes most of recorded history has buried most past civilizations in the sand.

Among the civilizations that arose West of the Indus only one survives intact – Israel – which retains the language, scriptures and religion of the Second Millennium B.C. But the notion that one God rules over nature as well as all of humankind universalizes the experience of this exceptional survivor.

An important chapter is entitled “The Bible is About Each of Us.” Shay writes: “One only has to open the Bible and start reading to discover its concepts of human equality and universal justice.” God’s special relationship with the patriarch Abraham and his children is a hallmark of its universality:

According to the Bible, the purpose of the Israelite nation was to serve as an example to other nations. The Israelites were to model an alternative society founded on laws that promote justice and equality. You can look high and low for a hierarchical order of kings, nobles and slaves among the Bible’s laws, but to no avail. All you will find is the Israelites, divided into tribes of equal standing and equal status before the law … and strangers, elsewhere exposed, fall under the protection of the law. The Israelites are awarded one homeland, but they are also under a divine mandate not to conquer any others. Understood in this light, the Bible’s depiction of Israel’s laws is no more racist or condescending to other nations than the description of a person’s exemplary principles is to other individuals.

There is an enormous dispersion of scholarly opinions about the historical accuracy of the biblical account, and Shay presents the evidence dispassionately. He doesn’t exhort the reader to accept that the Bible is entirely or mainly accurate, but rather shows that the evidence allows the skeptical modern reader to get comfortable with the idea that the Hebrew Bible reports history rather than legend.

Shay’s book is about the religions of Europe and Western Asia; the creeds of South Asia and East Asia are mentioned briefly, if sympathetically. The American Catholic bishop William Murphy is quoted about Eastern religions:

The human heart is seeking to know who he or she is, where they came from and where they are going. Sometimes they put together a pretty high set of standards by which they live. The Buddha did that. In all great religions, the more deeply you study and go into Hinduism you realize that there is an innate human stirring to know, a foundation there that has some extraordinarily wonderful ideals. Confucianism is the same – you go through the whole thing to discover that the human heart is always seeking.

Shay isn’t a professional Bible scholar, but he studied at Hebrew University in Jerusalem with one of the 20th century’s most celebrated teachers, Nehama Leibowitz. The terse, sometimes telegraphic prose of the ancient Hebrew Scriptures challenges the knowledge as well as the reading habits of the modern reader.

With all due respect to evangelical Protestants, who encourage every Christian to seek revelation in scripture alone, the novice reader requires assistance.

In Shay’s reading, the Bible is less about miracles than about character. Most of the great miracles of the Bible do not require us to suspend belief in the laws of nature; the parting of the Red Sea, he points out, was probably a tidal event in a marshy lake of reeds.

The heroes of the Bible are men and women who own up to their faults and do the right thing under stress. Among Jacob’s sons, it is Judah who will found the line of Hebrew kings, not because he is a saint or hero, but rather because he is able to correct his faults and take personal responsibility for others.

The story of Joseph in Genesis, the beloved son who was sold into Egyptian slavery by his jealous brothers and rises to become viceroy of Egypt and savior of his family, Shay explains, is just as much the story of Judah.

As a general introduction to the Hebrew Bible, In Good Faith sets a new standard. I find it more convincing, readable and informative than such popular guides to the Bible as the books of Harvard Professor James Kugel.