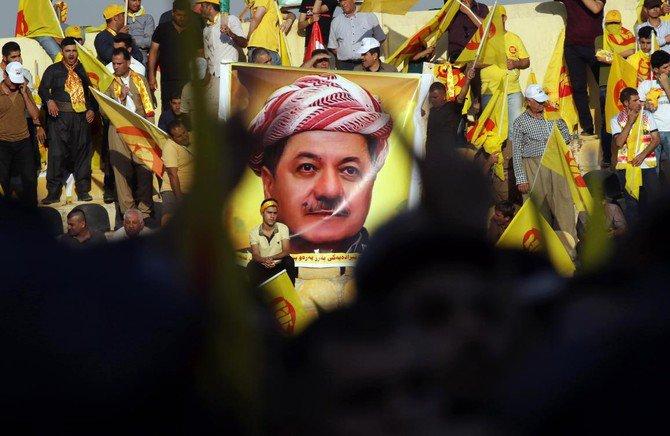 IRBIL: Iraq’s autonomous region of Kurdistan, which votes for a new parliament on Sunday, has endured a year of unrest and open crisis with the Baghdad government since it overwhelmingly backed independence in a referendum a year ago.
Here is a recap:

The September 25, 2017 referendum on Kurds’ long-cherished dream of independence for their mountainous northern enclave returns a 93 percent “yes.”
Regional president Masoud Barzani says there will be no immediate declaration of independence, but he calls for negotiations with Baghdad.
The central government is furious. It had warned against the referendum, saying it would be illegal and that “measures” would be taken to defend Iraq’s unity.
“We will never hold talks based on the results of the referendum,” Prime Minister Haider Al-Abadi says. “We will impose Iraqi law in the entire region of Kurdistan.”
Neighbouring Turkey and Iran were also against the referendum, concerned it could stoke separatist aspirations among their own Kurdish minorities, as were the United Nations, United States and other countries.

Baghdad’s backlash is swift. On September 29 it cuts the Kurdish region’s direct air links with the outside world and on October 2 Iranian and Iraqi forces stage joint military exercises near the Kurdistan border.
Iraqi forces on October 16 take control of the Kurdish-majority city of Kirkuk, capital of the oil-rich province of the same name, and start seizing oilfields that had been in the hands of the Kurds since 2014.
It is a massive blow to the Kurds as their already flagging regional economy largely depends on oil revenues.
Iraqi forces complete their takeover of disputed Kirkuk on October 20, despite resistance by Kurdish fighters.

Under pressure, Kurdish leaders take a step back on October 25 and offer to freeze the outcome of the referendum, calling for “an immediate cease-fire.”
Barzani, who initiated the controversial referendum, announces that he will step down on November 1. The prime minister, his nephew Nechirvan Barzani, takes charge.
Iraq’s Supreme Court issues a statement on November 20 declaring the referendum unconstitutional.

The Kurds are furious at their political elite and squeezed by an economic crisis partly triggered by Baghdad’s reprisals for the referendum.
Anger boils over on December 18 when demonstrators attack and torch the headquarters of main political parties and government buildings, in the first of days of protests that reach several towns.
On December 19 security forces open fire on protests in Raparin, leaving five dead. Scores of others are hurt. Troops are stationed on the streets and hundreds are arrested.
Amid the power cuts, rising fuel prices and suspension of civil servant salaries, the federal government prepares a budget that will cut the Kurdistan share from 17 percent to 12.6 percent.
On December 28 it extends the international flight ban.
Barzani denounces a “collective punishment” on the entire people of Kurdistan.

In January 2018 the Kurd and Iraqi leaders meet for the first time since the independence referendum.
In March Iraqi authorities lift the choking air blockade and resume paying the salaries of Kurdish civil servants and security forces.
Abadi visits the regional capital, Irbil, on April 26 as he campaigns for national elections the following month, still firm about any attempt to break away.
“Today we are all under the tent of Iraq, and whoever wants separation will be torn apart by hyenas,” he says.