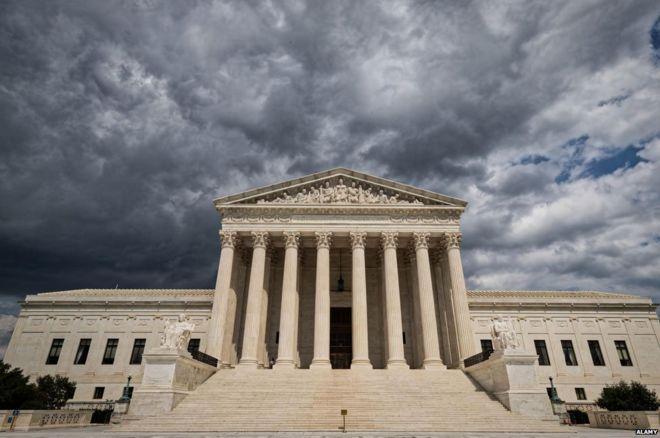 A California professor and President Donald Trump’s pick to become the next Supreme Court justice will appear before senators to tell conflicting stories about a high school party 36 years ago.

The accuser and the accused, in the glare of the spotlight, with a lifetime seat to the most powerful court in the US at stake.

While the drama will be intensely personal, as she alleges he assaulted her and he strongly rejects the accusation, this is more than a clash of two individuals and their recollection of past events.

It also represents the confluence of two movements – one decades in the making, the other a recent, powerful groundswell.

“These are unwitting combatants in an undeclared war, these people are not props for us to make our political points, nor are they to be demolished,” Arizona Senator Jeff Flake said on Wednesday afternoon.

The futures – and the reputations – of Brett Kavanaugh and Christine Blasey Ford hang in the balance. Whether they like it or not, however, the forces at motion overshadow everything.

A crowning moment for the anti-abortion movement

Forty-five years ago, a sharply divided US Supreme Court ruled in Roe v Wade that first-trimester abortion must be legal throughout the nation. The decision came as a shock to the anti-abortion activists, who have been fighting to reverse the decision since.

They’ve supported federal and state-level laws that would chip away at abortion rights. And they have organised what amounts to a pipeline of young conservative jurists, groomed by organisations like the Federalist Society, in order to assure anti-abortion voices in the federal judiciary.

Both Donald Trump’s Supreme Court picks, Neil Gorsuch and now Mr Kavanaugh, were on that approved list. Crucially, this nominee would alter the ideological composition of the court.

Anti-abortion activists believe they at last will have five votes – a majority – on the court to return the question of abortion legality to the states, where some legislatures could decide to outlaw the procedure entirely.

This fight, then, marks the culmination of a decades-long struggle. Victory, at last, is within grasp. It is a victory that Christine Blasey Ford threatens.

The #MeToo movement has a history measured in months, not years, but the struggle it represents is at least as powerful and enduring.

It represented a drive to rethink what was previously tolerated by women and what society has long swept under the rug. In Dr Ford, they found a new champion and, after Mr Trump questioned why she didn’t come forward sooner, a new hashtag, #WhyIDidntReport.

That the latest fight should come during a Supreme Court confirmation hearing has a certain poetic symmetry, given the spectacle of the Clarence Thomas nomination – during which he faced allegations of serial sexual harassment – fuelled the rise of a new generation of female politicians in the 1992 national elections, termed the “year of the woman”.

The woman who made those accusations, Anita Hill, herself became a hero for the feminist movement – and a villain to conservatives who at the time painted her allegations as an overtly political attempt to derail a Supreme Court nomination. Last week Ms Hill weighed in on the importance of the current moment for the women’s rights movement.

“In 1991, the phrase ‘they just don’t get it’ became a popular way of describing senators’ reaction to sexual violence,” she wrote in The New York Times. “With years of hindsight, mounds of evidence of the prevalence and harm that sexual violence causes individuals and our institutions, as well as a Senate with more women than ever, ‘not getting it’ isn’t an option for our elected representatives. In 2018, our senators must get it right.”

This ability to “get it right” this time would be a sign that the #MeToo movement has made real progress in changing American perceptions toward female victims. It is a victory that Brett Kavanaugh’s confirmation threatens.

It’s impossible to consider the #MeToo movement without also acknowledging the man who in all likelihood contributed to the emergence of this national mood.

The president largely stayed above the fray in the days after Dr Ford’s allegations, but his tone has sharpened as new accusers have come forward.

In fact, in a tweet the president drew a direct line between allegations of his own sexual misdeeds with those of Mr Kavanaugh, calling them both “false accusations”.

According to a White House source talking to CNN, Mr Trump now believes he must “personally take charge of defending” Mr Kavanaugh.

The president later said he was open to withdrawing his backing of the judge if the testimony was damning but he has given himself little room to back down.

Swirling toward the abyss

Perhaps because of the stakes involved, it was inevitable that the Kavanaugh fight would descend into total political war. Long-respected political norms and traditions have been cast aside en masse over the course of recent years. No weapon is left unused and no attack untried.

The debate about Kavanaugh and the issues raised by the allegations haven’t merely been the province of the key players – the parties involved, the senators considering the judge’s professional fate and the administration that put him forward for consideration.

The tangled path ahead

In comments made from the floor of the Senate on Wednesday, Mr Flake spoke of the toll the confirmation fight was having on the fabric of American society.

“The toxic political culture that we have created has infected everything, and we have done little to stop it,” he said. “In fact, we have only indulged it, and fanned the flames, taken partisan advantage at every turn, and deepened the ugly divisions that exist in our country.”

As the moment of reckoning for Mr Kavanaugh approaches, both sides warn of the dangers to come.

Conservatives caution that there is more at stake than just the fate of one judge seeking higher office.

“If somebody can be brought down by accusations like this, then you, me, every man certainly should be worried,” a lawyer close to the White House told Politico. “We can all be accused of something.”

“The reason Republicans are standing with Kavanaugh is because we know he is innocent and we know the Dems would falsely accuse Jesus himself if the GOP had nominated him,” writes conservative commentator Erick Erickson.

Progressives counter with their own warnings – that brave women are finally speaking up and the men in power ignore this at their peril.

“Oh man – the male lawmakers in this country have no idea what’s coming, do they?” tweeted grass-roots anti-gun activist Shannon Watts. “Women are realising we’re more powerful – and maligned – than we ever imagined. We’re taking back what’s ours: our voices, our rights and our seats at the table.”

Both sides view this as a defining moment – their chance to draw a line in the sand. And with mid-term elections just over a month away, voters will have a chance to weigh in while the conflict is still fresh in their minds.

The results, whether it’s a Democratic wave or a Republican consolidation of power, will be interpreted in the context of the outcome of the court battle in the coming days and weeks. But the shadow cast will endure well beyond the immediate political future.

“These past two years, we have tested the limits of how low we can go,” Mr Flake said. “I say to you that winning at all costs is too high a cost. If we cannot have a human – rather than a political – response to these witnesses, if we are heedless to the capacity that we have to do real and lasting damage, then maybe we shouldn’t be here.”

Maybe so, but here we are.