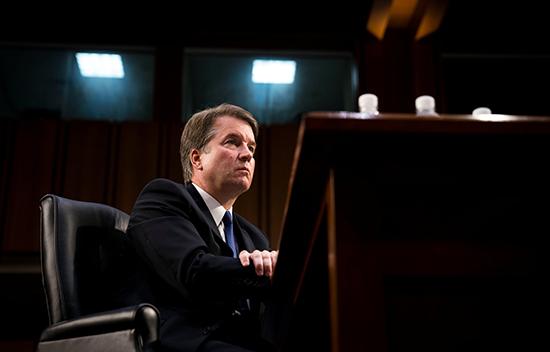 The integrity of the Supreme Court is at stake.

By The Editorial Board– The New York Times

With a third woman stepping forward with accusations that the Supreme Court nominee Brett Kavanaugh committed sexual assault as a young man, this destructive stampede of a confirmation, driven so far by partisan calculation, needs to yield at last to common sense: Let qualified investigators — the F.B.I. — do their job. Let them interview the many witnesses whose names are already in the public record, among them Judge Kavanaugh’s close high-school friend Mark Judge, then weigh the credibility of the various claims and write a report for the White House and the Senate Judiciary Committee.

To jam Judge Kavanaugh’s confirmation through now, without seeking to dispel the darkening cloud over his head, would be to leave the public in doubt about his honesty and character — and to set an even lower standard for taking claims of sexual abuse seriously than the Senate did 27 years ago in considering the accusations against Clarence Thomas by Anita Hill.

Yes, partisan games have no doubt been played on both sides. But the only reason for so much urgency about this confirmation is politics; the same cannot be said about calls for holding a fair and thorough investigation.

To recap: On Wednesday morning, the bomb-throwing lawyer Michael Avenatti made public an affidavit from Julie Swetnick, a woman who grew up in the Washington suburbs and claims to have traveled the same 1980s social circuit as Judge Kavanaugh. Ms. Swetnick says that he drank excessively at many parties she attended; that he was verbally abusive and physically aggressive toward young women, fondling and grabbing them; and that he was part of a group of young men who would spike the punch at parties with alcohol or illicit drugs with an eye toward incapacitating the female attendees, including Ms. Swetnick herself, and then abusing them.

These are grotesque charges — and, like the previous ones, they leave oceans of room for speculation and doubt. This is precisely why the Senate needs to stop trying to ram through this nomination by some arbitrary deadline and arrange for a thorough and nonpartisan inquiry.

Unlike Christine Blasey Ford or Deborah Ramirez, Ms. Swetnick is not claiming to have been assaulted directly by Judge Kavanaugh. But her accusations directly speak to his repeated insistence that he never behaved in a demeaning or disrespectful manner toward women. In his recent interview on Fox News, the nominee, seated primly beside his wife, presented his teenage self as a virtual choir boy, chastely focused on academics and sports and weekly church attendance. The nominee even said that he remained a virgin throughout high school and “for many years thereafter.”

That was a risky defense, and Judge Kavanaugh seems to be reconsidering it. In an opening statement prepared for him to deliver at his appearance before the Judiciary Committee on Thursday, the nominee now allows that he was “not perfect” in high school. He admits that he may have drank too much on occasion (though rarely on school nights) and that he may have said and done things that now make him “cringe.”

Yet he maintains that it is inconceivable that he would have sexually wronged anyone at any time. And he fiercely brushes aside all of the accusations to arise after Dr. Blasey came forward as part of plot against him. “Over the past few days, other false and uncorroborated accusations have been aired,” his prepared statement says. “There has been a frenzy to come up with something — anything, no matter how far-fetched or odious — that will block a vote on my nomination. These are last-minute smears, pure and simple.”

This claim of victimhood will most likely endear the judge to President Trump, who said at a news conference Wednesday that the accusations against Judge Kavanaugh were “all false.” (The president also said he would watch Dr. Blasey’s testimony and said he could possibly find it “convincing.”) It is also likely to play well with more retrograde lawmakers like Orrin Hatch, whose response to Ms. Swetnick’s allegations was to insist that Judge Kavanaugh is the real victim here.

“It shows there are people who would stop at nothing,” Mr. Hatch told CNN. “I don’t think we should put up with it, to be honest with you.”

In saner times, the Senate would have paused in its mad rush to confirm Judge Kavanaugh when the first credible allegations of sexual assault surfaced. As things stand, Chuck Grassley, the head of the Senate Judiciary Committee, has shrugged off these latest accusations and asserted that the show will go on without further inconvenience or delay.

This is dereliction of the Senate’s duty — and it is now up to senators who know better, who prize the dignity and duty of their chamber, to demonstrate that they are indeed something more than partisan tools.

This is not, as Republicans have claimed, a matter of demanding the destruction of a man’s career based on vague or unsubstantiated claims. It is a matter of treating such allegations with the proper gravity. There is no other way to protect the integrity of the nominating process — and of the nation’s highest court.