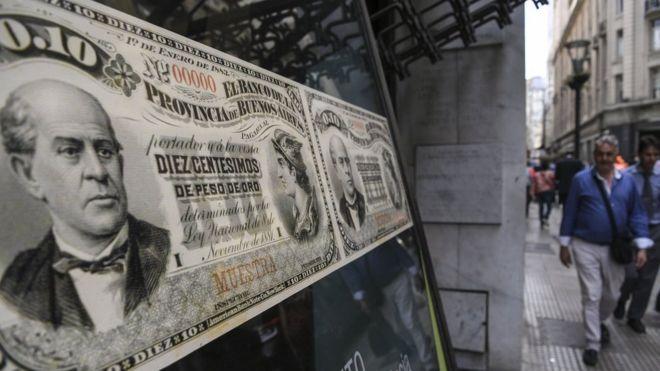 The International Monetary Fund has agreed to provide a bigger, faster bailout to Argentina than initially planned in an effort to restore market confidence in the country.

It will make about $50bn in credit available though 2019 – $19bn more than previously anticipated.

The move comes as Argentina faces a budget deficit and economic crisis.

Its economy has contracted as the value of the Argentine peso has plunged and a drought has hurt agricultural exports.

Alarmed investors have pulled money from the country, leaving the government and companies that hold debt in dollars in turmoil.

Officials plan to use the financing to support the budget.

As part of its agreement with the IMF, the government has said it will cut back spending, committing to a balanced budget by 2019 – a year earlier than planned.

Christine Lagarde, managing director of the IMF, said she is confident the package – one of the biggest in IMF history – will help restore market confidence in Argentina, while still providing for the “most vulnerable”.

But the budget plans have prompted protests and strikes in Argentina, stirring memories of the austerity imposed after earlier IMF bailouts.

Ms Lagarde said it is “essential” that Argentina’s Congress approve the 2019 budget. The bailout plan also needs approval from the IMF’s executive board.

Speaking at a press conference in New York, Ms Lagarde said: “A great deal of work remains to be done if Argentina is to respond effectively to the current challenging circumstances. That effort is just beginning. The IMF is committed to continue supporting the Argentine authorities in their efforts.”