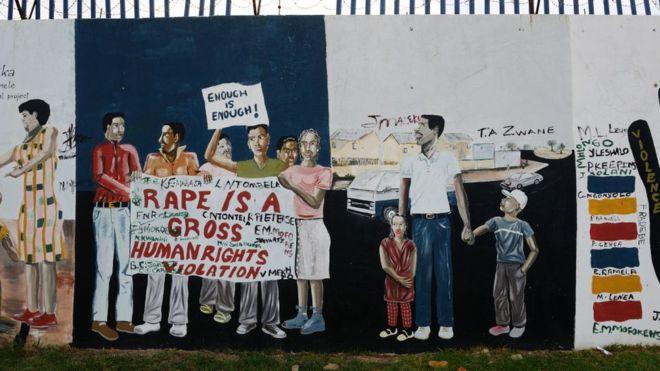 South Africans have expressed outrage following the alleged rape of a seven-year-old girl in a restaurant toilet.

A 20-year-old man allegedly followed her into the women’s restroom before snatching her and raping her in the men’s section, police said.

The suspect was arrested at the scene and charged with rape and possessing drugs. He has been remanded in custody and has not yet been asked to plead.

South Africa has one of the highest incidences of rape in the world.

The police recorded 40,035 rapes in the 12 months leading to 31 March, an average of 110 each day, the fact-checking organisation Africa Check says.

This is a slight increase on the previous year, which saw 39,828 recorded rapes.

South Africa’s children are not safe anywhere – that is the sentiment of many who have expressed anger and shock at the alleged rape of the seven-year-old girl in a local restaurant in the capital, Pretoria, on Saturday. She was at a family-friendly restaurant, had been playing without much care and yet violence found her even there.

Crime is a pernicious problem in South Africa but nothing strikes at the core of the nation’s psyche quite like the crimes that are committed against its children. Something is broken here.

It has become a daily part of this nation’s daily diet, waking up to the news of yet another crime, yet another victim and a justice system whose wheels many feel turn too slowly.

The latest crime statistics are alarming by any measure. South Africa is a nation whose women and children are under siege, where they are forced to navigate the threat of rape daily – and the odds are not in their favour.

The girl’s alleged rape is one of two cases of sexual abuse currently making headlines in South Africa.

“On Tuesday‚ a man came posing as a doctor. He asked her how she was doing following the birthing experience,” he added.

“She complained of heavy bleeding and he said he would check up on her. He then ordered her to undress and then he raped her‚” Capt Koena said.

South Africans have been expressing their views on Twitter on how to tackle the crisis: