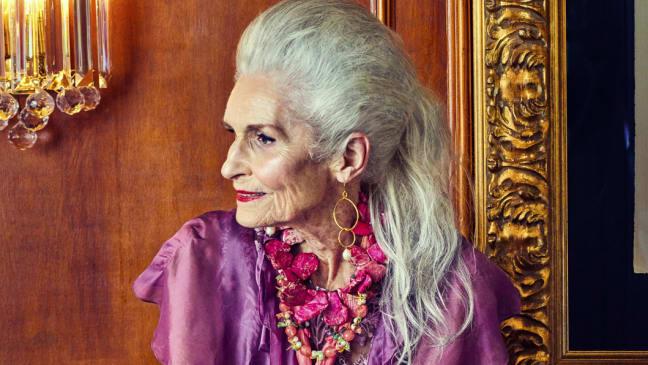 I am supposed to be meeting Daphne Selfe at 1.30pm, after she has finished a fashion shoot but at 11.45am, I get the call to come sooner. “That happens with me,” says an apologetic Daphne as we sit down for what is now an early-bird lunch.

On an average fashion shoot, you might expect a model to wear three looks in four hours, but Daphne has rattled through four in two.

“Everyone goes home quicker. I know what I’m doing, I suppose. It’s not like shooting with some young girl.” As the world’s oldest working model, with a career spanning 69 years, she’s certainly got the experience.

Daphne Selfe was born on July 1, 1928. She’s gung-ho and full of energy. She no longer drives, but will happily travel anywhere on the train from her home in Baldock, Hertfordshire. Her three children are in their 50s and 60s, her four grandchildren in their 20s. She is widowed, but does go on dates “occasionally” to the theatre or cinema. With whom, however, is none of our business.

Her health is good, aside from the vasculitis in her feet that prevents her from wearing heels. Her marbles are entirely intact, thanks for checking. She’s 168 centimetres tall – although shrinking a bit, if she’s honest.

And she’s undeniably, most definitely, beautiful, which explains why, when she was 70, she made the (grand)mother of all modelling comebacks and launched herself as a stereotype-challenging, social-media-dominating supermodel for the new millennium.

Daphne was discovered in 1949, aged 21. “I was working at a store in Reading, west of London, and they had a competition, a fashion show,” she recalls. “All the girls were going for it, and the prize was to be on the cover of the Reading & Berkshire Review. I won.”

A modelling agency took notice and added Daphne to its books. She moved into her aunt’s flat in inner-London’s Chelsea and went home to ride at weekends; horses have been a passion since she was a teenager. There was no fashion scene to speak of.

“Modelling then was nothing like it is now,” she says. “Colour [photography] was just coming in. We didn’t have a London Fashion Week; that’s only been in the last 25 years. Our main catwalks were in the big stores in London, Northampton, Bournemouth. Only one or two girls ever went to Paris. People wouldn’t ever have heard of anybody who was a model.”

Considering that many models today are household names with personal brands worth millions and agents to negotiate what types of work they will or won’t do, it’s fair to say that Selfe comes from another world. It is all the more remarkable, then, that she has adapted to the industry now. The egos, she says simply, were a lot smaller back then.

“As a model you were there to advertise a product. I’ve advertised sausages, wine and couture. You did anything and you always did your own hair and make-up.”

When Daphne married Jim Smith in 1954, her career slowed down. By the time she considered fashion again it was the 1960s, she had three young children, and ideals were changing (“I was not appropriate to the ’60s, it was Twiggy’s turn,” she says). Daphne continued doing commercials, some artistic modelling and worked as an extra in theatre and television.

Jim died in 1997, after 43 years of marriage. “He’d been ill for four years. He’d had three strokes,” she remembers. “We’d moved to a village two years before he passed away. That was perhaps not a good idea, on reflection, as I did everything and I was a bit cut off. While he was ill, it was impossibly hard.”

In 1998, a few months after Jim’s death, Daphne received a call asking if she’d be interested in returning to the catwalk at London Fashion Week. “It was something to do,” she tells me. “I thought it might stop me moping. I’m a fairly optimistic person. I just hoped it might remind me of that and help me enjoy life and keep going. The children were pleased that I was okay.”

Aged 70, she got an ovation as she fronted the show. The press hailed her appearance as a breakthrough moment for older women in fashion, the start of a “greynaissance”.

A week later, Vogue called. “They were running an article on how it feels to be old,” says Daphne, laughing. “Nick Knight was the photographer and a scout from Models 1 was there on set. At the end of the shoot, she said, ‘We want you on our books.’ And that’s how it all began again.”

Since signing with the esteemed London agency, Daphne has enjoyed some of the most high-profile jobs of her career. She’s modelled for brands such as Dolce & Gabbana, has changed perceptions of what it means to look like a model, and has started conversations around ageing.

“I didn’t know I was going to get these amazing opportunities,” she admits. “I could never have done them if my husband was alive, unless he had been fit. I thought Models 1 would drop me after six months – how much work would there be for a 70-year-old? But I’ve now been signed with them for 20 years and I’ve got as much going on as ever.”

Instagram, needless to say, is a totally new part of the job, which Daphne has embraced. She joined the platform aged 85 and now has almost 60,000 followers. But the pressures of the industry today, she considers, are in some ways the same as they have always been for women.

“When I started you had to go around to the photographers with your portfolio to see if they liked you. I lost jobs when I was younger, by saying no [to advances]. I didn’t care. I was quite a strong young person to always say no. Perhaps for people who needed the money it was a more difficult situation to be in.”

Does she think progress has been made, in diversity at least? “I don’t encourage the models who are too fat, or too thin, because both of those are bad for health. But it’s brilliant to see different ages, skin tones, disabilities, everything being accepted, yes.”

She says there wasn’t such a focus on having “vital statistics” when she started out. She weighed 64 kilograms, was happy and healthy. “Most models were probably aged 30. I was a young one,” she notes. “I don’t think teenagers should be in it; they’re far too young and their figures aren’t developed.”

“My style has got more adventurous,” she says, showing me pictures of dresses that she’s made for herself. “Now I wear whatever I like. It’s very easy for older people to shock just by wearing nice clothes.

“It’s a shame when people lose interest in what they look like,” she goes on. “Young and old have lost their sense of occasion – people walk around in their pyjamas, which is terrible. I remember when jeans first came in. I’ve never liked them.”

Diet, for Daphne, is also very important when it comes to feeling good, and I noticed her inspecting her salad with care. “I don’t eat nightshade vegetables,” she says firmly. It’s a dietary requirement I’ve never come across before, even among the most picky of fashion folk.

Has she noticed a difference since cutting them out? “Perhaps not,” she admits, before telling me off for laughing, then subtly shifting the course of our conversation.

“I’ve got a Nutribullet, and every morning I blend half an avocado, spinach, almonds, blueberries, half an apple and half a banana,” she tells me. “I’ve never eaten processed food. I was brought up during the war, so there wasn’t much to eat; we had rations.

I think that was good for us. A lot of people my age are living longer.”

For exercise, Daphe does morning ballet stretches and yoga. She wears make-up every day and always removes it properly at night with rosewater. She’s never smoked and has never, ever considered Botox. “Why should you put poison in your face?” she asks. “I’ve tried a lot of nice creams, but they don’t make any difference. I just use Nivea. Eat well and smile – a smile is as good as a facelift.”

For many, age is to be feared. That’s propaganda, Daphne says. “I do realise the body is not quite the same, but I push myself. The children think it’s hilarious that I’m still modelling. I don’t do retiring, though. When life is so interesting, why should I give it up until it gives me up?”

This article originally appeared in the Telegraph Magazine (UK).

This article appears in Sunday Life magazine within the Sun-Herald and the Sunday Age on sale September 30.