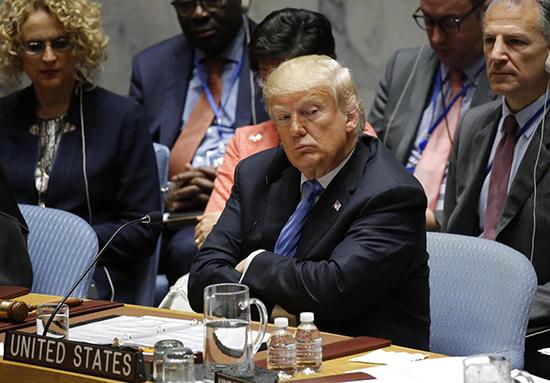 Trump told on Sept. 26 the United Nations Security Council that the “Syrian regime’s butchery is enabled by Russia and Iran” during a session devoted to discussing non-proliferation of weapons of mass destruction, before switching to a more positive note.

“I want to thank Iran, Russia and Syria for –at my very strong urgent and request– substantially slowing down their attack on Idlib province and three million people who live there in order to get 35,000 targeted terrorists. Get the terrorists but I hope the restraint continues. The world is watching,” he said.

“Thank you also to Turkey for helping to negotiate restraint. Anything the U.S.A. can do to help resolve this problem in order to save perhaps even hundreds of thousands of lives, maybe more, we are willing and able. We are available to help,” Trump added.

Trump also addressed U.S. policy on Iran, advances in the denuclearization of North Korea and his administration’s trade war with China during his opening statement.

Seated at the center of an arc-shaped table, Trump immediately uttered tough words against Iran, saying that a government with Iran’s track record “must never be allowed to obtain” a nuclear weapon.

Trump said many things are happening “behind the scenes” in North Korea, and that good news would be coming in the coming months and years. Trump also commended Kim Jong Un for reaffirming his commitment to denuclearization, properity and peace for the peninsula.

Trump also claimed China has been attempting to interfere with the upcoming U.S. midterm elections, but provided no further details.

“Regrettably, we found that China has been attempting to interfere in our upcoming 2018 election,” he said.

Trump stated that Beijing doesn’t want him or the Republicans “to win because I am the first president ever to challenge China on trade.”