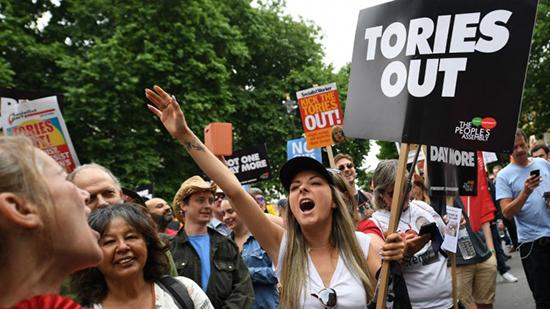 The unveiling of Labour’s policies for a large-scale overhaul of the UK have been met with a mixture of optimism and derision outside of the party’s conference halls in Liverpool.

Much has been made of Labour’s overtures to the business community. “There are millions of businesses out there which deserve our respect and we will always support them,” shadow chancellor McDonnell said in his big conference speech yesterday.

“They are responsible, ethical entrepreneurs who pay their taxes and support our community. They should know that we are proud of them.”

However, “there is a minority that don’t live up to those standards”, he added.

The director-general of the Confederation of British Industry (CBI), Carolyn Fairbairn, welcomed Labour’s proposals, which include renationalisation and expanding employee ownership of large companies. “No one in business would disagree with the fundamental aims of these policies,”  she said.

But Fairbairn also warned that “Labour must meet business halfway or they will crack the foundations of this country’s prosperity”.

All the same, notes Chorley, the phrase “meet halfway” can be taken by Labour “as a sign of how far the debate has moved in their direction”.

Not everyone is convinced, of course. The Daily Telegraph says that business leaders are warning that Labour’s plans could put Britain in an “economic deep freeze”, while The Sun claims McDonnell’s “socialist revolution” would see “dozens of senior businessmen” fired from nationalised companies.

Meanwhile, The Observer says while “there is much to welcome in the party’s economic agenda”, the plans “could be bolder still”.

“Labour is halfway to persuading the country,” concludes The Guardian’s Polly Toynbee. “Revulsion at austerity has swung the pendulum of public opinion its way.”

So what exactly is Labour proposing? Here are some of the party’s more eye-catching ideas:

McDonnell’s key pledge was the creation of a Public and Community Ownership Unit in the Treasury, to handle the planned return of water, energy, rail and the Royal Mail to public ownership.

“We are ending the profiteering in dividends, vast executive salaries, and excessive interest payments,” he said.

Labour has also provided details of its plans for inclusive ownership funds (IOF), which would force all large firms to give workers shares worth up to £500 a year each.

Every year “companies would transfer at least 1% of their ownership into the fund, up to a maximum of 10% total IOF shareholding”, reports The Guardian.

Shadow education secretary Angela Rayner has pledged to end the free school programme and restore the right of councils to open and “commission” new schools.

The creation of new schools will be backed by £8.4 million in capital investment, which was announced in Labour’s 2017 general election manifesto.

In his conference speech this morning, shadow Brexit secretary Keir Starmer appeared to all but confirm that Labour will try to vote down the final Brexit deal.

“Labour now seems to have its ducks in a row once again – and officially, all options remain on the table if the Brexit deal is indeed voted down,” says Politico’s Jack Blanchard. That includes the so-called People’s Vote, although the party leadership insists an election would be preferable.