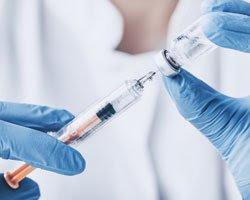 Influenza was deadlier last season than it has been for at least four decades, killing 80,000 Americans. So said the head of the U.S. Centers for Disease Control and Prevention late Tuesday in an interview with the Associated Press.

As autumn brings another flu season, CDC director Dr. Robert Redfield told the AP that “I’d like to see more people get vaccinated.”

The agency recommends that everyone over the age of 6 months get the annual flu shot.

Last year’s flu season made headlines for its scope and severity, but the new number still surprised experts.

“That’s huge,” Dr, William Schaffer, a vaccine expert at Vanderbilt University in Nashville, told the AP. He said that 80,000 deaths is more than double the number expected in a typical “bad” flu season. In recent years, the annual flu death toll has ranged from 12,000 to 56,000 deaths, the CDC said.

The 2017-2018 flu season was made worse by two factors: strains that hit the very young and elderly especially hard, and a poor matchup between those strains and those in the flu vaccine.

Still, even the relatively weak flu shot probably saved many lives, CDC experts say, so everyone should avail themselves of the shot again this season.

The flu typically kills by triggering other deadly conditions such as pneumonia, stroke and heart attack. The most deadly flu season on record remains that of thew 1918 pandemic, when upwards of 500,000 Americans are thought to have died.

As for the coming season, the CDC says that, so far, at least the circulating strain seems to be a milder one, and there are preliminary signs that the vaccine match is good.