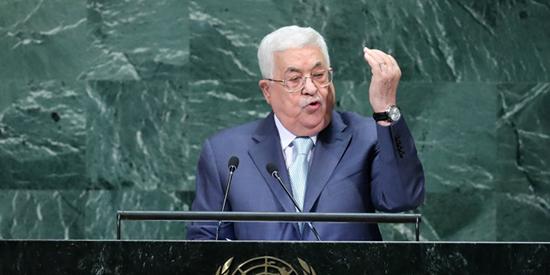 Palestinian Authority President Mahmoud Abbas claimed before the UN General Assembly on Thursday that the Trump administration’s recent actions toward Israel and the Palestinians were “an assault on international law.”

“We were shocked by his decisions and actions that completely contradict the role and commitment of his administration towards the peace process,” Abbas said of Trump. He condemned the president’s decisions to recognize Jerusalem as Israel’s capital, cut off assistance to UNRWA and the PA, and close the PLO mission in Washington.

“I renew my calls to Trump to rescind his decisions and decrees on Jerusalem, refugees, and settlements, which contradict international resolutions and the understandings we have reached,” he added.

Abbas took particular umbrage at the Trump administration’s view that only 40,000 Palestinians are legitimate refugees, asking, “Where did you get this number?” and claiming that there are in fact six million refugees.

An executive faculty body at the University of Michigan on Monday urged professors to base their letters of recommendations on “student’s merit,”…

“They are much too biased toward Israel,” he said of the American administration.

Abbas set a defiant tone from the outset, announcing that “Jerusalem is not for sale and the Palestinian people’s rights are not up for bargaining” before giving his formal greetings to the UNGA.

He then blasted Israel in no uncertain terms, saying, “I return as this colonial occupation continues to suffocate us, undermining our serious unwavering efforts to build the institutions of our cherished state, which this august assembly recognized in 2011.”

The Palestinian leader — still serving a term in office that technically ended in 2008 — emphasized that he made decisions based on “instructions” decided on by the Palestine National Council, the parliamentary body of the PLO. In that regard, he stressed the PNC’s decision to suspend Palestinian recognition of Israel “until Israel recognizes a State of Palestine on the June 4, 1967 borders.”

He also continued the Palestinians’ harsh rhetoric regarding the al-Aqsa mosque in Jerusalem, saying, “The Israeli settlers and the Israeli army on every single day are committing acts of blasphemy against our holy sites, especially al-Aqsa.” Israel has thus far not changed the status quo in regard to al-Aqsa, under which the site is controlled by the Islamic Waqf under Jordanian supervision.

Abbas slammed Israel’s recently passed Nation-State Law, which defines Israel as the state of the Jewish people. The PA president described it as “a racist law that crossed all red lines” that “will inevitably lead to the creation of one racist state, an apartheid state, and thus nullifies the two-state solution.” He called on the UN to condemn the law.

Bizarrely, Abbas also claimed that Yigal Amir, who assassinated former Israeli prime minister Yitzhak Rabin, is regarded as a hero in Israel, asking, “Why is Amir a hero while our people are criminals?” Amir is currently serving a life sentence for the assassination in an Israeli jail.

Abbas also appeared to reiterate his support for Palestinians who have committed acts of terrorism, saying “I pay tribute to our hero martyrs and prisoners of war.”