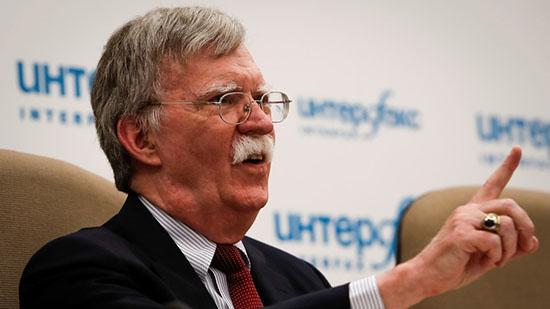 Legally, the U.S. has to use troops there to fight the Islamic State. But the White House wants them to deter Iran.

As the Marine Corps general leading U.S. operations in the Middle East in 2013, James Mattis was fired by then-President Barack Obama for his hawkish views on Iran. Today, as defense secretary, Mattis is again in a tight spot due to U.S. policy toward Tehran—but this time, he is on the receiving end of hawkish pressure.

President Donald Trump’s administration has in recent months been ramping up economic pressure and rhetoric against Iran. This week, National Security Advisor John Bolton issued a particularly pointed threat, warning that there will be “hell to pay” if Tehran continues to “cross” the United States and its allies.

“The murderous regime and its supporters will face significant consequences if they do not change their behavior,” said Bolton, speaking at the United Nations General Assembly gathering in New York. “Let my message today be clear: We are watching, and we will come after you.”

In a move that strayed squarely onto Defense Department turf, Bolton declared that the United States will keep a military presence in Syria as long as Iran has forces there. This put him at odds with the Pentagon’s long-standing assertion that the roughly 2,000 U.S. troops are in Syria for one purpose: to ensure the lasting defeat of Islamic State militants.

Mattis now must walk a fine line between the administration’s increasingly hostile rhetoric against Iran, including its regional ambitions, and concerns about U.S. mission creep in Syria.

In reality, Mattis and Bolton likely share similar concerns about Iran, experts say. But the defense secretary has reason to present a more cautious front in Syria. For one thing, lawmakers in Congress are balking at what they see as an illegal expansion of the U.S. mission in Syria, which is legally predicated on a fight against nonstate militant groups, not a country like Iran. At the same time, on the ground, escalation poses a very real risk to U.S. troops from Iranian proxies, forces loyal to Syrian President Bashar al-Assad, and Russian forces.

“Mattis is probably most concerned about the implications for U.S. forces in theater (e.g., blowback from Iranian and Russian proxies) and is being more cautious in his public statements, given Congressional concerns about legal authorities,” Melissa Dalton, an analyst with the Center for Strategic and International Studies, said in an email.

“Mattis may also not want to get out in front of the White House in this political environment,” she added.

In a gaggle with reporters at the Pentagon on Monday, after Bolton’s comments, Mattis asserted that there has been no change in U.S. policy toward Syria.

“We obviously have got to train up local security forces so that ISIS [can’t resurge]. But that is part of the defeat of ISIS,” Mattis said. “I’m not sure that that’s any change. … We’re up against an unconventional enemy, not a conventional force that could come right back in. I think this has been our position for at least a year and a half.”