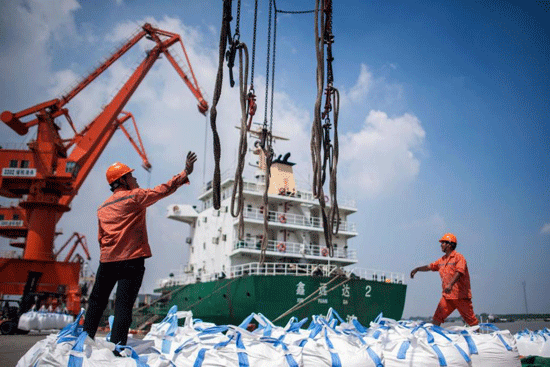 New research from 27 countries shows trade is viewed positively, but differences exist on the perceived advantages.

Trade has long been a source of countries’ domestic political debates and in recent years has become increasingly contentious on the international stage. Despite the political rhetoric about nations rethinking their economic relationships, people in advanced and emerging economies still have a positive perspective on trade, new research shows. At the same time few people now believe more trade translates into more jobs, highers salaries and a decrease in prices, according to a survey that also shows people in developing economies less warm to the benefits of trade than in previous years.

A new study from the nonpartisan Pew Research Center reveals that more than 80 percent of respondents in advanced and emerging economies such as Kenya, the Philippines or Indonesia believe trade is good. At the same time, people surveyed in 27 countries are not as enchanted about the potential benefits of more commercial cooperation. In advanced economies, only 47 percent of respondents agree that trade leads to more job creation, while 56 percent in emerging economies shared the same view.

Additionally, respondents say they are not convinced trade can materialize into higher salaries, with only 3 in 10 people in advanced economies saying trade increases salaries and only about half of respondents in emerging economies having a similar opinion. People in countries such as Poland, India, Kenya and Tunisia are more likely to believe increased trade leads to Job creation, according to the Pew report. In the U.S., 36 percent of respondents now say trade will bring about more jobs, compared to 20 percent in 2014. More than half of respondents in Poland, India, South Korea and Tunisia say they think trade will increase salaries.

People in emerging economies are also the most distrustful when it comes to trade decreasing prices in their countries. About 2 in 10 people say they think trade will lower prices, while the share in advanced economies is around 30 percent.

The Pew survey polled more than 30,000 people from May 14 to Aug. 12 of this year. The 27 nations where the survey occurred comprise about two-thirds of the global gross domestic product.

The differences between the views expressed in the two types of economies are less visible today than in Pew’s research from 2014 when respondents in emerging markets were more enthusiastic, say the authors of the study. This is mainly due to high expectations and different economic experiences.

“In 2014, people in emerging markets and developing countries were significantly more upbeat about the benefits of trade, such as the creation of jobs and the increase in wages, as for some of those countries that was people’s life experience,” says Bruce Stokes, director of global economic attitudes at Pew. “They had entered the world economy and jobs had been created and people made more money. Now, four years later, in some of these emerging markets, they have not seen the kind of benefits that they anticipated.”

Conversely, while respondents in advanced economies seem to have a better attitude toward trade now than in the past, the people in those countries who believe in its benefits are a minority, Stokes adds.

The study also shows that views on trade are influenced by the respondents’ level of education, as well as people’s perception on their own country’s economy. The more educated tend to see trade as an opportunity for job creation, and so do those who see their national economy positively. More than half of those polled in 24 of the 27 countries who say they think their economy is healthy also say trade will create more jobs, while 4 in 10 said trade will increase wages. In contrast, around 4 in 10 people in a negatively perceived economy say trade will bring about more jobs, while only about 30 percent say trade will increase salaries.

Mixed Views in America, the EU and Japan

When it comes to trade, the U.S. is particularly divided and political views play an important role in shaping people’s attitudes. President Donald Trump has made renegotiating trade deals a central part of his foreign policy. Early in his presidency, he withdrew the U.S. from the Trans-Pacific Partnership and ordered new negotiations on the North American Free Trade Agreement. The U.S. and China are currently in a trade war, exchanging tariffs on imports made from the two countries.

According to the Pew study, 74 percent of Americans say they think trade is a good thing, although their views fluctuated in times of concern, such as during the 2008 economic crisis. Other studies have shown that America tends to views its relationship with most advanced economies in the EU, Canada and Japan as fair, while China is still viewed as an unfair trade relations. On Wednesday at the United Nations, Trump accused Beijing of trying to interfere with the approaching U.S. congressional elections, claiming his trade policy as the reason. Trump produced no evidence to support his claim.

On the other side of the Atlantic, more than 80 percent of Europeans view trade positively, but those who believe it creates jobs and increases wages are still a minority. Europeans are also more likely to believe trade increases prices, with 40 percent of respondents expressing that concern. Out of the nations surveyed, the Netherlands, Spain and Sweden topped the positive scale, with 93 percent of respondents in those countries supporting trade. Sweden, an economy that heavily relies on trade, also topped the list of nations that see it as a way of reducing prices. Most pessimistic about trade were respondents in France, Greece and Italy, while 89 percent of respondents in the United Kingdom, a country that often reported mixed views on trade since Brexit, still see trade as something predominantly positive.

At the opposite side of the spectrum, respondents in Japan showed skepticism about most benefits stemming from trade, although their overall attitudes about it were positive. Differences can be seen in gender as well as in age, the study showed.

“Japanese men are more likely than women to believe that trade is good for Japan,” say the authors of the study. “Three-in-ten Japanese ages 18 to 29 say trade lowers prices, around twice the share of their elders, those ages 50 and older, who credit trade with restraining inflation.”

Experts say that the way trade is presented is key to how people understand it and shape expectations from it. While economists tend to be more reserved in their predictions, politicians often use trade topics in their political discourse.