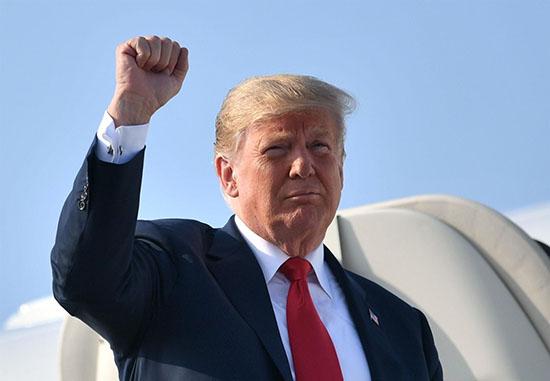 The president’s press conference showcased what his critics hate about him—and what his supporters love about him.

On Wednesday afternoon, Donald Trump stood at a podium in New York, where he was attending the United Nations General Assembly, and gave something resembling a press conference. In a discursive 81 minutes, he called Democratic senators “con artists” for investigating allegations that the Supreme Court nominee Brett Kavanaugh sexually assaulted a girl when he was in high school. He insisted, in his signature third person, that China has respect for “Donald Trump’s very, very large brain” and that North Korea’s brutal dictator wrote him a “very personal,” “beautiful” letter. There was word salad about Middle East peace and something about Chuck Schumer voting against George Washington.

Trump has divided America into two realities, and at key moments, his language reinforces that divide.

The Kavanaugh prosecutor is asking a baffling line of questions.

If you live in the reality that reads The Atlantic, you watched that press conference and thought Trump had gone off the rails. He rambled to the point of incoherence, skimming across unfinished thoughts until his sentences fell off a cliff. His policy pronouncements stayed on the spectrum between incorrect and terrifying. The lies, the bullying, the interrupting— this was not the behavior of a commander in chief but of a WWE personality.

But if you live in the reality that mainlines Fox News, you saw something else—a strong president. You heard Trump assert America’s resurging greatness: Steel mills are being built, farmers will thrive, and the economy is doing better than even he predicted. Trump suggested that he was wheeling and dealing on trade with everyone from South Korea to Mexico, and showing everyone who’s boss. World leaders at the UN were laughing with him, not at him. He was too busy chairing the Security Council to pay attention to Kavanaugh’s latest accuser. And his genuine solidarity with the accused reinforced the narrative taking hold in conservative circles: Don’t fear that your daughters’ lives will be ruined by assault; fear that your sons’ lives will be ruined by false accusations.

The truth, as we now know, is irrelevant in this reality. To anyone who already believes that Trump is strong, Trump’s language was comforting. You saw a man in his element, blocks away from his very own building with his very own name on it, standing quite literally at the center of the world stage, and clearly enjoying himself. He exuded what his base so desperately hopes he and, by extension, they have—power.

Trump hasn’t done many of these solo press conferences. (My former boss President Barack Obama used to get heat for not doing more, but Trump has famously avoided them without much criticism.) And yet, in his few appearances, he has completely upended the medium. Gone are the predictable if tense affairs where reporters asked questions and presidents would either answer them or give the appearance of answering them. They have been replaced with a reality show where the president pits reporters, nations, his staff, and even his own controversies (Kavanaugh v. Rosenstein)against one another, all to demonstrate that he alone hands out roses.

And while some of America sees this for what it is—unhinged chaos—others see it filtered through the prism of right-wing media, where all such performances come out looking strangely authoritative.

Whether Trump’s obsessive references to Obama are a tic or a strategy, they serve his cause. On Wednesday, the president said he would have the chance to nominate 145 lower-court judges, because “President Obama wasn’t big on picking judges.” Why? “They got tired, they got complacent—something happened.” That “something” was, in fact, Mitch McConnell, who brought the process to a halt when Republicans won the Senate. But that’s a pesky detail; what Trump supporters heard is that Obama was weak and lazy, while he is a man of action.

When a question was asked about the administration’s policy toward Cuba, the president again invoked his predecessor, saying that Obama “gave them a pass,” as if Obama’s groundbreaking deal with Cuba had been a free-for-all. From the economy to North Korean hostages to Iran, he couldn’t help but invoke the former president’s name.

His critics found these repeated digs boorish, and small. His fans probably found them resolute, funny, and, yes, powerful. Trump, I wager, is perfectly aware of how he comes across in both realities, and he’s fine with that. He doesn’t care how the other half lives, and how they think.

Why is everyone so unfair to Donald Trump?

To wit: Responding to a question about Kavanaugh, Trump falsely claimed that 52 percent of women voted for him. The Twitterati went bananas, fact-checking his obvious lie: He only got 41 percent of all women; that 52 percent was white women. Trump—a man single-mindedly obsessed with the 2016 election—surely knows this. This intentional error signaled to his voters that he knows who they are and he’s not out to attract anyone new. They can have him all to themselves. And that is a potent electoral strategy.

A poll released on the day of Trump’s press conference showed that Kavanaugh’s support among Republican women had dropped by 18 points. But 2020 is still far away. If the Democrats do, as some predict, take back Congress and start investigating the administration, Republicans will surely close ranks around their threatened leader. If Kavanaugh isn’t confirmed and Democrats are able to spend the next two years blocking the confirmation of another right-wing justice, the conservative base will rally around Trump.

If Wednesday’s press conference demonstrated anything, it’s that Trump may be so unpresidential as to be untouchable.