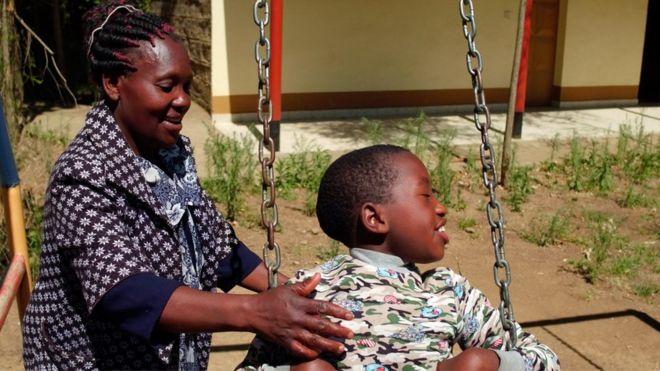 Lydia Njoki’s youngest child Samwell, who has epilepsy and physical disabilities, would not be here if some of her family had their way.

Her own grandmother went as far as suggesting how she could kill her baby.

“She told me to insert needles into Samwell’s veins – that they would kill him slowly and no-one would know what had happened,” she said.

“People said I was cursed, that’s why I got a child with a disability,” Ms Njoki said.

Many a night, she cried herself to sleep: “I hated myself and asked God, why me?”

Florence Kipchumba faced similar pressure – her family told her that her baby should be sacrificed.

“As an infant, Meshack used to cry a lot, and when my family couldn’t take it any more, I was kicked out of home,” she said.

A friend then took her in, only to also suggest she kill the baby a month later. “She asked me to put acid in his food so that he could die, but I refused to do so and left her house.”

The decision to resist the pressure to kill has had lifelong consequences for Ms Kipchumba. She was forced to flee her community, and now lives with her son in a tin shack, doing odd jobs to survive.

When Meshack was younger, his backbone was weak and he had no head control. “I would dig a hole in the ground, lay him in it and use the soil to form a cushion around him,” his mother said.

She tells me she doesn’t regret her decision to keep her child for a moment. The boy is now eight years old and can sit and walk short distances, albeit with some difficulty.

Ms Njoki and Ms Kipchumba are not alone. A new study in Kenya has found that 45% of mothers interviewed by a leading charity faced pressure to kill their babies born with disabilities.

The survey found that the situation was worse in rural areas – where the figure could be as high as two in every three mothers.

Most of the women interviewed by Disability Rights International said their children were considered “cursed, bewitched and possessed” and that a belief prevailed that the mothers were being punished for their sins, including being “unfaithful to their husbands”.

Infanticide is rooted in old traditions and beliefs. An elderly traditional birth attendant in Narok – south-west of the capital Nairobi – told the BBC that according to her culture, babies with disabilities were killed out of love.

“What used to push people to do that was the helplessness,” said Timpiyan enole Koipa, seated inside her mud-walled one-roomed house dressed in a bright chequered red and white shawl and rows of traditional beaded necklaces.

“The child would otherwise suffer if it was allowed to live,” she adds.

While infanticide was the most shocking part of the Disability Rights International’s report, it is not its only finding. The researchers initially set out to assess conditions in orphanages and care homes, where nearly 3,500 children in Kenya live.

They took us to see one, Compassionate Hands for the Disabled, in Nairobi. The story of the home, and its owner, in some ways encapsulates the problems this society has with disability.

Anne Njeri was born disabled and decided to start a day-care centre for children with mental and physical conditions. She never intended it to be a residential home.

She tried to look for the parents who had abandoned the children, but to no avail – they dropped the children off in the morning and simply never picked them up again.

She now has 86 children in her care. Watching her interact with them, it’s clear they love her, and are loved in return, but she admits the home needs to do more. Researchers agree, and told us the way they are looked after, kept indoors and often restrained, will make their conditions worse.

But it is the government of Kenya they are most critical of.

The Kenyan government did not respond to our request for a response, although it is understood they admit more needs to be done.

While the idea that half of women with disabled children faced pressure to kill them as babies is truly shocking, it only reflects those whose babies made it to childhood. We have no idea how many others gave in to that terrible pressure.

Infanticide of children with disabilities is not unique to Kenya, but data is hard to come by across the world.

Studies recognise that it has history back to ancient times, remaining a significant problem during the 20th and 21st Centuries.

Research says children under one are at four times greater risk of being murdered than any other age group.

Cases often go unrecorded or combined with other offences, and most countries lack institutions that track such deaths, so the true magnitude of infanticide remains unknown across the world.

“They are done underground,” says Veronica Sialo, a mother of a child with cerebral palsy and a community leader in Narok.

“Because any child can die at birth or when they go home [from hospital] you just hear the child has died. But when you follow the background, that child was disabled and that’s why the family killed that child,” she adds.

“Some of us in our culture believe it’s a curse, that you’ve been bewitched, so you’re not wanted in the community.”

Her views correspond to the findings of a report titled Children accused of Witchcraft, by the UN Children’s Agency, Unicef.

The report, which focused on the African continent, says “abnormal births” would often led to the killing or abandonment of babies.

But in some countries, practices and beliefs changed because of the influence of colonial missionaries. Other communities have seen the introduction of alternative practices such as paying fines in the form of dances and ceremonies instead of sentencing the child to death, helping to erase suspicions.

Back in Narok, Veronica is doing her best to improve the lives of mothers like her and their children. She has formed a support group that now has 43 members, including Florence Chebet and Lydia Njoki.

These mothers say they have found solace in knowing others like them. They want their children to be accepted by society. They meet once a month to share experiences and to encourage one another. Veronica’s mission is to see her community overcome one of the oldest and most cruel beliefs.

“We need to do awareness so that they know that these are children like any other,” she concludes.