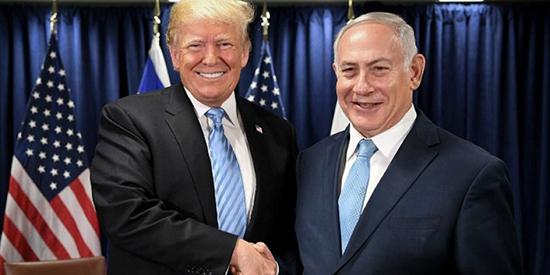 by Benjamin Kerstein –The algemeiner

Israeli politicians from across the spectrum reacted to President Donald Trump’s endorsement of a two-state solution to the Israeli-Palestinian conflict during a meeting with Prime Minister Benjamin Netanyahu on Wednesday.

“I like a two-state solution,” Trump said in response to a question from the press. “That’s what I think works best.”

According to Israel’s Channel 2, Israeli Justice Minister Ayelet Shaked of the Jewish Home party reacted negatively to the statement, saying, “No to a state minus, no to a state plus. The solution must be regional — not on the shoulders of the State of Israel alone.”

A “state minus” is a term used by Netanyahu to describe an independent Palestinian state over which Israel will have security control.

“The creation of a Palestinian state on the territory of Judea and Samaria (the West Bank) is a bad solution and as long as the Jewish Home is in the government, it will not be established,” Shaked added.

Her words echoed those of her party’s leader, Naftali Bennett, who said earlier, “The president of the US is a true friend of Israel. Nonetheless, it is important to emphasize that a Palestinian state, which would be a disaster for Israel, will not be established as long as we are in the government.”

Opposition leader Tzipi Livni reacted more positively, stating, “Two things that he said are connected to Israel’s future — the US’s stance on the side of Israel’s security and the solution of two national states. These are both important to our future.”

According to the Hebrew news site Walla, Defense Minister Avigdor Lieberman was largely indifferent to what he seemed to regard as political posturing. “A Palestinian state doesn’t interest me,” he said, “the Israeli interest is a secure Jewish state. Here, there are many problems more acute than just symbolism.”

Netanyahu himself emphasized the issue of security control. “Make no mistake: Israel will not give up on security control west of the Jordan (river) as long as I am prime minister,” he said. “I think the Americans accept that principle.”

Following his meeting with Netanyahu, Trump said that he was comfortable with whatever solution the parties choose.