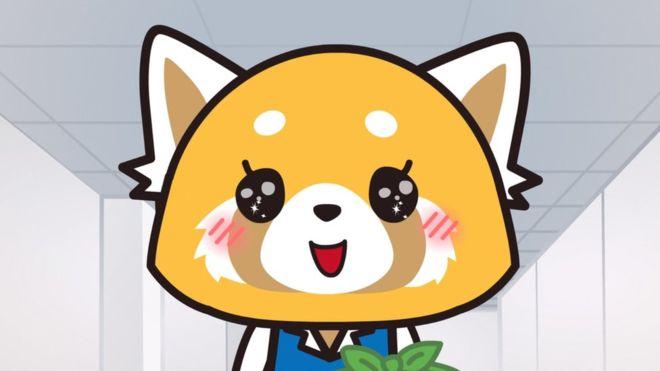 Aggretsuko, a Japanese cartoon for adults on Netflix, is currently making waves around the world. But why is it so popular with millennials?

Aggretsuko is a cartoon character created by Sanrio, the company behind the popular character Hello Kitty.

The series focuses on a red panda called Retsuko, who works in the accounting department of a trading firm in Tokyo.

Through her job, Retsuko experiences office politics, workplace bullying and gender discrimination. To deal with it, at night after work she heads to a karaoke bar and releases her frustrations by singing death metal songs.

Aggretsuko, which is short for “Aggressive Retsuko”, first appeared in a series of animated shorts produced by Japanese studio Fanworks in April 2016.

The shorts went viral after being shared on social media, and reaction to the character in the West was so positive that Netflix commissioned Fanworks to make a 10-episode season, which launched in April this year.

In August, Netflix announced that it had commissioned a second season.

Every year, Sanrio holds an internal competition for staff to come up with potential new characters, and in 2016, Aggretsuko was a finalist.

The designer who came up with the concept for Aggretsuko said she was inspired by office workers in Tokyo.

They are also required to attend after-work functions with their colleagues and superiors, which has led to a rise in drunken salary men seen on a regular basis sleeping on trains, park benches and pavements after passing out from over-imbibing.

“Aggretsuko reflects the stress and frustration that the designer observed in office workers,” Sanrio tells the BBC. “She felt that they were ‘screaming from the heart’, which is characterised through Aggretsuko’s favourite pastime: thrash metal karaoke.”

Many Aggretsuko fans are millennials who grew up with Hello Kitty, and now, after entering the grownup world of work, they have graduated to Aggretsuko.

In Sanrio’s 2018 Character Ranking competition, where people around the world vote for their favourite character, Aggretsuko came first in the UK.

“She showcases the ‘kawaii’ aesthetic that Sanrio are well known for, but unlike other characters who focus on constant sweetness and being a good example to people, Aggretsuko shows a wild side rarely shown, and that unexpected rage adds to her charm,” Holly Brooks, 22, an illustration graduate in Telford, Shropshire, tells the BBC.

Sonia Leong, a leading UK manga artist, says the simplicity in the art style makes it easy for people to see themselves, and their colleagues, in the show.

“Even though there are a few things that are particularly Japanese, there’s always someone who takes perfect selfies, or someone who stalks people on social media to find out who they’re dating, and there’s many a time that we’ve all had to bite our tongue at work,” she says.

Jay, a marketer in London, agrees: “It’s relatable because of the coping mechanisms that each individual has. Whilst I don’t relate to Retsuko all the time, I find myself in the other characters and there are instances where I would agree with their advice or experiences.”

The show has been popular in the rest of Europe and the US too.

Vinh, 28, an immuno-oncologist at the National Institute of Health in Washington DC, says he identifies with Aggretsuko because he has experienced workplace bullying.

“In the show, Retsuko has to bear with borderline harassment from Ton, her supervisor, and there’s no recourse in a HR representative,” he says.

“In my previous position, I had a HR [officer] to talk to but they were ultimately not helpful in resolving the situation with my supervisor, so they might as well have not existed at all.”

Charlie Houlmont, 38, a web designer in France, says that millennials now have a rather bleak view of the world of work.

“Many young people I meet on social networks, Twitch and in real life feel it’s a pipe dream to hope they can achieve their ideal job,” he says.

“There have never been as many depressed young people as today, and work, which should be instrumental in giving them a good life, looks as if it’s this huge obstacle getting in the way of happiness.”

What can you do if you are experiencing bullying at work?

Michelle Ryan, professor of social and organisational psychology at Exeter University, has these tips:

A survey of 2,000 people for Investors in People found that three in five workers in the UK believe their mental health has been negatively affected by their work, while only a third said their mental wellbeing was supported by their employer.

Its research showed that top workplace issues include bullying, gender discrimination, lack of job progression, pressure to respond to emails at all times, and being placed in roles where the individual’s skills are not utilised.

“Work-life balance has got worse over time because of technology, but I think a lot of issues that were hidden before are now being highlighted – the internet has enabled more transparency on things,” says Investor in People’s chief executive Paul Devoy.

“The issue gets amplified through social media, and then politicians are asked what they will do about it. So in a way it helps set an agenda.”

‘I want to scream’

Michelle Ryan, professor of social and organisational psychology at Exeter University, says individuals can only do so much to cope with workplace bullying.

“Most bullying is less overt than it used to be – now it’s subtle things like additional work, or including or excluding a colleague from a meeting,” she tells the BBC.

“It would be good for the government to put in place stronger rules around bullying and harassment.”

Sanrio says while it did not set out to highlight gender discrimination, it is pleased that so many people experience catharsis from watching Aggretsuko.

“It really feels like women can’t get angry. I’m constantly worried that I will be perceived as too pushy or bossy for speaking my mind, so I don’t talk much,” says Amanda Howell, a 29-year-old software automation engineer in Franklin, Tennessee.

“When Aggretsuko goes to sing death metal, that’s basically the mask slipping. That’s what I feel like when someone says something crappy to me at work or when I’m working late again when everybody else is gone.

“I just want to scream.”